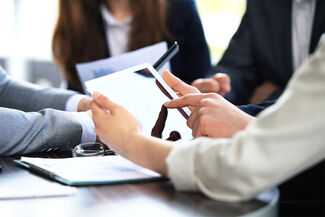 Morgan & Morgan’s Business Trial Group represents employees and businesses in a wide variety of employment lawsuits in Fort Lauderdale and throughout South Florida.

On behalf of workers, our attorneys handle cases involving breach of employment contracts and unpaid compensation such as wages, bonuses, benefits, or commissions. We also represent businesses in cases that include breaches of noncompete, nonsolicitation, and nondisclosure agreements, tortious interference with employment contracts, and misappropriation of trade secrets.

The Business Trial Group's employment attorneys charge no hourly fees, and no fees at all unless we succeed.

The Business Trial Group’s employment attorneys represent clients on a contingency fee basis. We charge no hourly fees for our services, and no fees at all unless we successfully resolve your case. Contingency fee employment litigation ensures that our clients’ claims are decided on merit — not on their ability to afford high hourly attorney fees.

If you have a possible legal claim related to an employment agreement, it is in your best interests to speak with an attorney and understand your rights.

Contact the Business Trial Group for a free case review.

An employment contract is a legally binding agreement between two parties. A breach of contract occurs when one party fails to meet their contractual obligations. Unpaid compensation is one type of contract breach, but depending on the contract terms, many different breaches can occur.

Breach-of-contract claims may arise in the context of an employer-employee relationship or for goods and services provided on an independent contractor (non-employee) basis.

A worker is legally entitled to the salary, wages, and bonuses they have earned. Not receiving the full amount of compensation you are owed at work may be the basis for a lawsuit.

Unpaid compensation claims may arise over:

Even when unpaid compensation is a clear contract violation, employment contracts and related legal issues can be complex, and an attorney should be consulted.

A breach-of-contract claim may be filed if one party:

Individuals and businesses can be within their rights to not meet their contractual obligations when the other party fails to perform as promised. Nonpayment and other nonperformance that is not supported by a valid reason, however, could constitute a breach.

Whether a contract breach invites legal consequences depends in part on whether the breach is "material" or "immaterial."

Whether a breach invites legal consequences largely depends on whether the breach is material (renders the contract irreparably broken or defeats its original purpose) or immaterial (an insignificant noncompliance with the contract).

The law also excuses some material breaches of contract that occur from unforeseen circumstances. And since mistakes do happen, accommodations that salvage the contract to both parties’ satisfaction can often be made.

Specific contract dispute questions should be discussed with a Fort Lauderdale employment attorney.

Businesses are often put in the position of needing to file a lawsuit to protect their rights. Commonly, businesses must safeguard their intellectual property and other interests.

A trade secret is a type of intellectual property that is not safeguarded by formal government registration, such as a patent or trademark, but is instead protected through confidentiality. Trade secrets could include intellectual property such as customer lists, product formulas, manufacturing techniques, and marketing strategies.

While patents last as long as 20 years and copyrights as long as 100 years, trade secrets last indefinitely — provided they are kept secret. Accordingly, entrepreneurs and businesses fiercely protect their trade secrets from being disclosed. This is often done through the use of confidentiality or nondisclosure agreements (NDAs) and noncompete agreements.

Trade secrets obtained through theft, bribery, misrepresentation, espionage, or a breach of duty to maintain secrecy can lead to legal action. Possible remedies include damages, lost profits, and royalties.

While these restrictive covenants are intended to protect legitimate business interests, they cannot be used to protect a business from all types of competition. In addition, the agreement must be reasonable in its time, scope of activities, and geography, and usually must include some form of “consideration,” or quid pro quo.

Because these agreements are contracts, a violation of the agreement could constitute a breach of contract and entitle the protected party to damages, including lost profits.

Employment disputes can be complex, contentious, and high-stakes. It is not uncommon for the wealthier party to use high hourly attorney fees as leverage against their opponent, driving up legal costs and forcing the other party to accept an unfair settlement.

But this tactic does not work against the Business Trial Group, which handles all employment cases on a contingency fee basis. We bear the entire cost of a lawsuit, and if we do not win, you pay us nothing.

The Business Trial Group has recovered millions of dollars for our clients in employment lawsuits involving breaches of contract, unpaid wages and commissions, and other matters. If you are a business, an employee, or a contractor dealing with a potential employment dispute , please contact us for a free consultation.