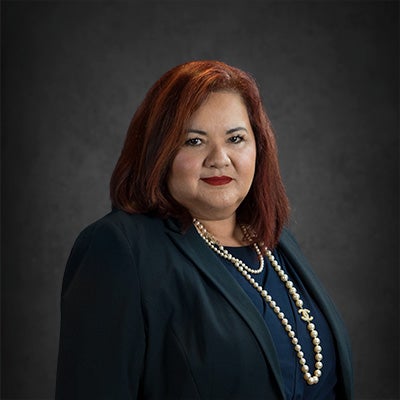 Velma Lozano Jones was born in San Benito, Texas as a second-generation Mexican-American and is fluent in Spanish. She lived in Corpus Christi, San Antonio, Laredo, Brownsville, Del Rio, and the Rio Grande Valley. As her parents were not able to finish school because they had to work in agriculture to help support their families, they were strong advocates for getting a post-graduate education. After high school, she attended and graduated from Del Mar College earning an Associate’s Degree in Arts-Mid Management with the Ruben Bonilla Sr. Memorial Scholarship. She proceeded to Texas A&M-Corpus Christi earning a Bachelor’s Degree in Business Administration-Marketing. She diligently worked full-time all during college to pay for her education. She became an active and initiated member of the co-ed Delta Sigma Pi Professional Business Fraternity where she served as chapter secretary and senior vice president to help fellow business students in their business studies, post-graduate job search, and ethical practices in business enterprise.

Velma moved to Orlando, Florida and proudly joined Morgan & Morgan in 2000 where she worked as a personal injury pre-suit paralegal for eight years. It was during this time that she was admitted to and attended Florida A&M University-College of Law in 2004. She continued to work full-time at Morgan & Morgan while attending law school at night. She graduated in May 2008 and was admitted to the Florida Bar on September 30, 2008, and to the United States District Court for the Middle District of Florida on April 12, 2012. She gratefully accepted John Morgan's invitation to join his legal team in 2009 and worked at the Morgan & Morgan Kissimmee Office until 2014 and Orlando downtown office until 2015. She tried cases in Florida and Federal courts and fought for injured clients who had suffered losses in auto crashes, slip and fall and negligent security injuries.