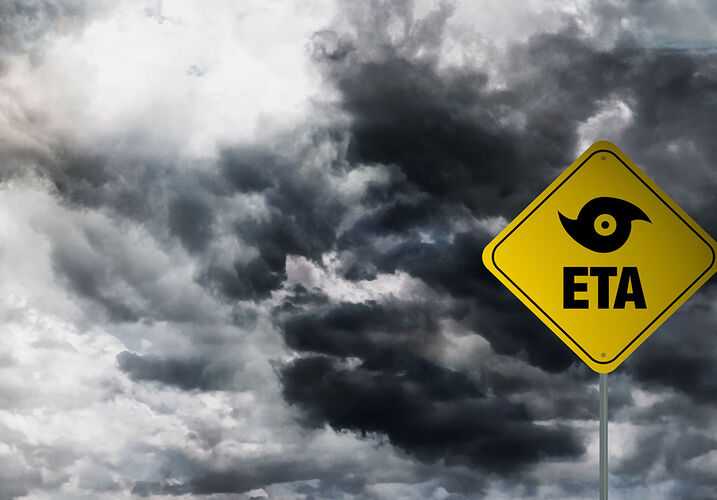 Eta is the 12th named tropical storm to hit the continental United States in what has already been a record-breaking season. Florida had been spared from the worst of it until Eta’s first strike. After making its initial landfall, the storm moved into the gulf and gained strength for days before hitting the state a second time and traveling across the peninsula.

Eta had already brought a drenching 18 inches of rain to the cities of Miramar and Pembroke Pines before striking Florida again. The second landfall carried even more torrential rain, bombarding Sun City Center with an additional 9 inches and Saint Petersburg with 8 more inches of rain.

The storm also hit Tampa and Sarasota, setting city records for the wettest day in November history. Heavy rains and a storm surge brought flash flooding to the region, with some of the worst flooding and property damage occurring in Bradenton.

High winds from the storm’s first strike had already caused a swath of destruction, including downed trees, closed bridges and roads, and 45 thousand residents without power. Eta’s second landfall tore off roofs, downed power lines, and left an additional 30 thousand without power in its wake.

As Florida recovers from Eta, some will encounter even more difficulty: insurance companies that either underpay or will not honor claims for storm damages. If you suffered property damage due to Tropical Storm Eta and had your claim denied, you could be eligible for compensation. Fill out our free, no-risk case evaluation form and one of our lawyers will be in touch.

Even after the worst of a tropical storm is over, conditions could still be dangerous. Taking the following steps will make your cleanup smooth, safe, and efficient:

Going through a major storm is hard enough; you shouldn’t also have to fight your insurance company. If you believe your claim has been minimized or denied unfairly, get in touch with Morgan & Morgan. Our team has more than 30 years of experience helping people like you get the compensation they deserve.

We have the experience, knowledge, and resources to take on the biggest insurance companies — and we don’t get paid unless you win. For more information, fill out one of our no-obligation case evaluation forms.