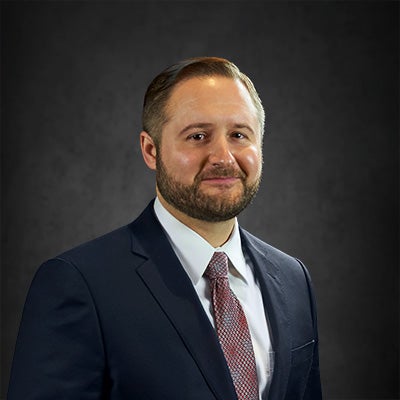 Darrell W. Kropog, Jr., is a recognized personal injury attorney in our Tampa office. He obtained his undergraduate degree from Louisiana State University (LSU) and was a member of the LSU Lacrosse team playing defense and defensive midfielder. After graduating from LSU, Mr. Kropog accepted an academic scholarship to attend the Thomas M. Cooley Law School (now Cooley Law School at Western Michigan University). During his last year in law school, he completed an externship as a law clerk for the prominent Baton Rouge law firm of Manasseh, Gill & Knipe.

Upon graduation from law school, Mr. Kropog accepted a position as an Assistant Public Defender where he grew his passion for helping others by preserving justice through fairness and dedication. While serving at the Public Defender’s Office, he represented both juveniles and adults charged with various levels of misdemeanors and felonies. In doing this, he litigated many jury and non-jury trials obtaining favorable results for his clients.

Since 2010, Mr. Kropog has continued to pursue his passion for helping others at Morgan & Morgan. His practice focuses on helping those who have been injured by the negligence of another with cases ranging from serious automobile crashes to injuries resulting from traumatic falls.

Mr. Kropog has tried numerous civil cases to verdict in the counties of Hillsborough, Pinellas, Pasco, and Hernando. In October of 2016, Darrell obtained a verdict for an injured driver that was featured in a 2017 issue of Lawyer Magazine for Hillsborough County.