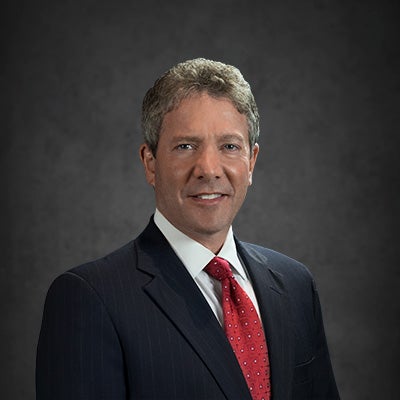 Michael Goetz was born in St. Petersburg, Florida on December 28, 1966. In 1989, he earned a Bachelor of Arts degree with high honors in political science from Emory University. And In 1992, he earned his law degree with honors from the University of Florida.

After graduating law school, Mr. Goetz joined the international law firm of Holland & Knight LLP where his practice focused on the defense of claims involving product liability, medical negligence, and general liability, as well as complex commercial litigation matters. He became a Partner in the firm on January 1, 2000.

In 2002, Mr. Goetz joined Morgan & Morgan, where his practice shifted to the prosecution of personal injury and wrongful death claims on behalf of individuals and consumer classes. He has represented hundreds of clients in cases involving automobile and premises liability, nursing home abuse and neglect, and environmental torts.

Mr. Goetz was admitted to The Florida Bar in 1992. He holds the highest rating awarded to lawyers for legal ability and ethics (“AV”) by Martindale-Hubbell. Additionally, in multiple, successive years he was designated by Florida Trend’s Magazine as a “Florida Legal Elite” in the field of Civil Trial, and by Law & Politics Magazine as a Florida “Super Lawyer” in the field of Class Action / Mass Torts.

In 2018, Mr. Goetz was selected to membership in America’s Top 100 High Stakes Litigators, a designation received by less than one-half percent of active attorneys in the United States.