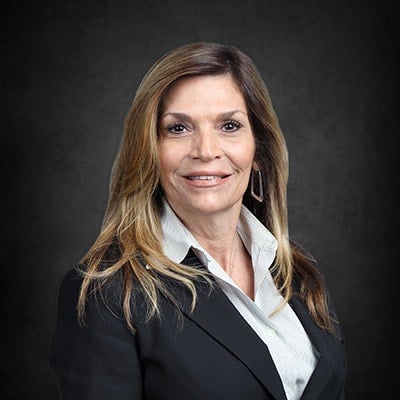 Cora Molloy is originally from Manhattan, New York, but has called Florida her home since 1970 when her family relocated to Miami, Florida. After spending over twenty years in South Florida, she discovered paradise in Southwest Florida when she traveled across the state in 1991, and moved to Fort Myers.

Ms. Molloy began her legal career in 1986 as an Assistant State Attorney in Dade County working under the direction of former Dade County State Attorney/former United States Attorney General, Janet Reno. She handled criminal prosecutions on behalf of the state of Florida from misdemeanor and DUI trials, as well as felony prosecutions. In 1988, she began working for Florida Attorney General, Robert Butterworth, as an Assistant Statewide Prosecutor handling complex, multi-jurisdictional racketeering actions, organized crime prosecutions, and historical drug trafficking cases throughout the state of Florida.

After five years as a criminal prosecutor, Ms. Molloy changed direction and began working for the law firm of Adorno & Zeder,P.A. in Coconut Grove, Florida as an Associate Attorney representing employers and their liability insurance carriers in personal injury claims. She later relocated to Fort Myers where she initially worked for Troy & Yeslow, P.A. representing auto insurance carriers such as State Farm and Progressive Insurance companies, and their insureds in connection with personal injury/auto accident claims.

In 1996, Ms. Molloy joined the firm of Henderson, Franklin, Starnes, & Holt, P.A.  in Fort Myers, Fl. This is when she began litigating workers’ compensation claims on behalf of employers, municipalities, and their carriers and servicing agents. She became a Shareholder/Partner of the firm in 1999, and was Chairperson of the workers’ compensation section of the firm from 2005 to 2013. During her seventeen years with Henderson Franklin, she litigated claims involving all types of injuries to include spinal injuries, traumatic brain injury claims, catastrophic injury claims, occupational disease claims, and heart and lung claims involving law enforcement officers and firefighters.

Ms. Molloy joined the Fort Myers office of Morgan & Morgan, P.A. in January, 2014. She now uses her broad range of legal experience and expertise to assist injured workers in securing the benefits that they are entitled to receive after they are injured on the job. Ms. Molloy is fluent in Spanish and hopes to be able to serve the growing Latino population in Southwest Florida. Helping others has always been one of her priorities as demonstrated by her involvement with United Way,Make-A-Wish Foundation, and PACE Center for Girls. Now she will be able to help countless others in need of assistance and guidance after a workplace accident has occurred.