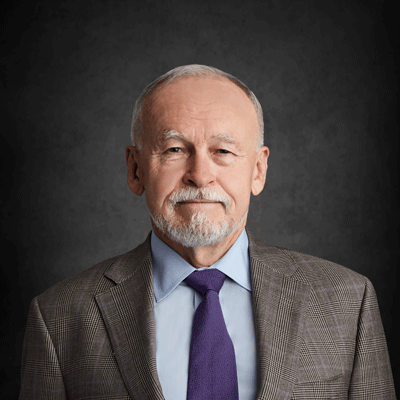 John A. Yanchunis leads the Class Action Department of the firm. Mr. Yanchunis’ practice— which began after completing a two-year clerkship with United States District Judge Carl O. Bue, Jr., Southern District of Texas—has concentrated on complex litigation and spans over 36 years, including class actions for almost two-thirds of that time.

John A. Yanchunis leads the Class Action Department of the firm. Mr. Yanchunis’ practice— which began after completing a two-year clerkship with United States District Judge Carl O. Bue, Jr., Southern District of Texas—has concentrated on complex litigation and spans over 36 years, including class actions for almost two-thirds of that time.

Mr. Yanchunis has served as lead, co-lead, or class counsel in numerous class actions in a wide variety of areas affecting consumers, including but not limited to anti-trust, civil rights, defective products, environmental claims, life insurance, annuities, and unfair and deceptive practices. He has been appointed by courts to leadership positions in multidistrict class action litigation, and presently serves as the lead in In re: Yahoo! Inc. Customer Data Breach Security Litigation, 5:16-md-02752 (N.D. Cal.), as a member of the plaintiffs’ steering committee In re Equifax, Inc. Customer Data Sec. Breach Litig., 1:17-md-02800 (N.D. Ga.); on the three-member Plaintiffs’ Steering Committee in MDL No. 2664, In re: U.S. Office Personnel Management Data Security Breach Litigation, and serves on the Executive Committee overseeing the consumer class, the financial institution class, and the shareholder derivative litigation pending against Target Corporation—one of the largest data-breach cases to date—in In re Target Corporation Customer Data Security Breach Litigation, MDL No. 2522 (D. Minn.).

As a result of his experience in insurance and complex litigation, beginning in 2005, Mr. Yanchunis served as lead counsel for the Florida Department of Financial Services and the Florida Department of Insurance Regulation (the insurance regulators of Florida) in their investigation of the insurance industry on issues concerning possible antitrust activity and other possible unlawful activities regarding the payment of undisclosed compensation to insurance brokers. Mr. Yanchunis served as lead regulator counsel and worked with a core group of state Attorneys General from the National Association of Attorneys General, which were selected to conduct the investigations. The insurance regulators for Florida was the only insurance regulators in the group. The litigation that was filed and the other investigations recovered millions of dollars in restitution for Florida consumers and resulted in significant changes in the way commercial insurance is sold in Florida and across the country.

During his career, Mr. Yanchunis has tried numerous cases in state and federal courts, including one of the largest and longest insurance coverage cases in U.S. history, which was filed in 1991 by The Celotex Corporation and its subsidiary, Carey Canada, Inc. During the seventeen years the case was pending, Mr. Yanchunis served as lead counsel for several insurance companies, regarding coverage for asbestos and environmental claims. The case was tried in three phases over several years beginning in 1992. Mr. Yanchunis was also lead counsel for these parties in the subsequent appeals which followed a judgment in favor of his clients.

Mr. Yanchunis has also served on many committees of The Florida Bar, including leadership positions. Most recently, he completed a term as the Chair of the Consumer Protection Committee of the Florida Bar. Mr. Yanchunis has also represented The Florida Bar in a number of matters. He was also appointed by the Florida Supreme Court to enforce an injunction of the Court, and his efforts resulted in the incarceration of the respondent in that case on the finding that the respondent had engaged in indirect criminal contempt. As a result of his experience in the area of class litigation and ethics, he has served as an expert for The Florida Bar on ethical issues arising in class action litigation.

He received the Elder Law Section of The Florida Bar awarded him its Chair’s Honor Award for Mr. Yanchunis’ handling with one of his law partners of a class action against the state of Florida for violations of federal law in failing to deliver a benefit under Medicaid to approximately 41,000 elderly residents of nursing homes in Florida. He is also the recipient of The Florida Bar Foundation President’s Award for Excellence for his outstanding leadership in promoting the Foundation’s mission to help provide legal assistance for the poor.

Martindale-Hubbell has honored Mr. Yanchunis with the prestigious “AV” rating. He has been recognized continuously as a Florida Super Lawyer and The Best Lawyers in America in his area of practice. He is a Fellow in The Trial Lawyer Honorary Society of the Litigation Counsel of America, and a Fellow of The Florida Bar Foundation.