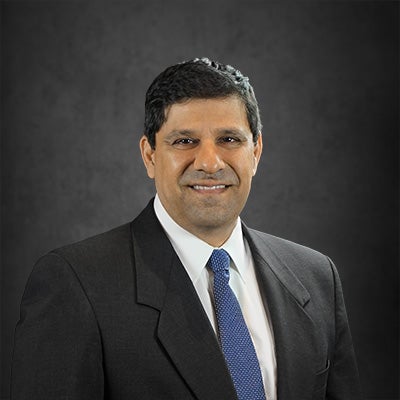 Sumeet Kaul is the managing partner of Morgan & Morgan’s Tampa office. He joined the firm in 1997 and since that time has aggressively represented thousands of families. He has obtained five jury trial verdicts in excess of a million dollars, while additionally recovering numerous six-figure jury verdicts. His practice focuses on personal injury, wrongful death, motor vehicle accidents, and premises liability cases. Mr. Kaul has received an “AV” rating by Martindale-Hubbell, which is a testament to the fact that his peers rank him at the highest level of professional excellence. In 2022, Mr. Kaul was recognized as one of America’s Top 100 Personal Injury Attorneys®. Throughout his career, Mr. Kaul has handled high profile cases covered by the New York Times, St. Pete Times, Sarasota Herald-Tribune and local television. The New York Times featured one of Mr. Kaul’s cases, exposing how certain nursing homes divided themselves into limited liability companies to protect their assets while carrying minimum insurance. He was also featured on television for a daycare case where a minor child almost choked to death on a noose attached to a pole.

Mr. Kaul grew up in New Jersey and Michigan, where he attended high school. After graduating from the University of Michigan in 1988 with a Bachelor of Arts degree, Mr. Kaul followed in the footsteps of his grandfather, a Justice of the High Court in India, and pursued a legal education. While at the University of Florida College of Law, he served as a board member of the International Law Journal and earned a Juris Doctor in 1991. Mr. Kaul began his legal career in Sarasota, primarily handling commercial matters for a small firm.

From 1993 through 1996, Mr. Kaul served as an Assistant State Attorney for the Twelfth Judicial Circuit in Sarasota where he successfully tried and convicted defendants charged with murder, drug trafficking and white collar crimes. He then worked as In House Counsel for Allstate Insurance Company where he tried and defended auto negligence and premises liability cases. Currently, Mr. Kaul is a member of the Florida Bar and New York Bar.