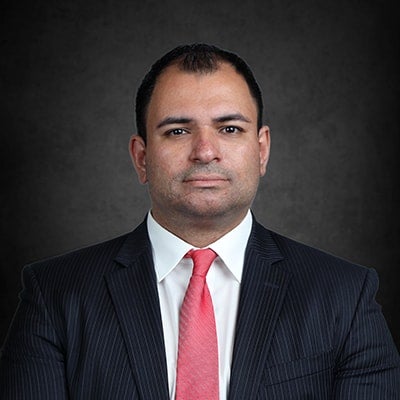 Mr. Oliveri was born in Punta Del Este, Uruguay, and as teen moved to New York City. He graduated with honors from the University of South Florida with a BA in Economics and Criminal Justice. He completed his undergraduate education while working full-time for RadioShack, where he received numerous result-based recognitions including three President Circle Awards. Mr. Oliveri is a “Double Bull,” having earned an MBA with a concentration in Finance also from the University of South Florida.

Prior to attending law school, Mr. Oliveri worked for many years as bank officer at Bank of America, where he received numerous result-based recognitions including two national Awards of Excellence. While attending Florida A&M University College of Law, Mr. Oliveri was a legal intern for the personal injury department of a multi-state law firm, where he developed an affinity for litigation. He finished law school a semester ahead of his classmates, and immediately passed The Florida Bar Exam.

Mr. Oliveri then joined an Orlando-based law firm as a plaintiff’s attorney, where he worked in the areas of personal injury and civil litigation, and where he was quickly offered a managing attorney position. He continued expanding his law knowledge by joining a Brevard County-based law firm where he represented the subrogation claims of numerous insurance companies such as State Farm, USAA, Windhaven, and also the medical collection claims of physician groups and hospital groups such as Community Health Systems.

The same multi-state law firm where Mr. Oliveri had been a legal intern many years ago then asked him to re-join their ranks. There, Mr. Oliveri focused his practice 100% in the litigation of personal injury, premises liability, and slip/trip & falls cases.

At Morgan & Morgan, Mr. Oliveri proudly represents the best-interests of his clients by employing his economics and business school analytical background, his past experience representing insurance companies, and his innate passion for personal injury litigation. Mr. Oliveri is bilingual in Spanish.