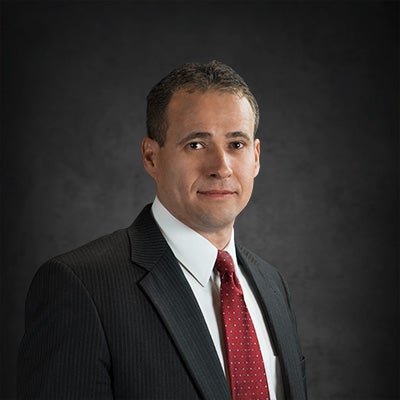 Steven Earle is a partner in the Jacksonville office. He grew up in Destin, Florida as part of a military family with his father serving in the U.S. Air Force and his mother teaching in Florida public schools. After graduation from the University of Florida he began his legal career working for the State of Florida and then left to practice personal injury law with James N. Powers in Orlando, Florida in 2001.

Since joining Morgan & Morgan, Mr. Earle has been focused on the fight for his clients who have been injured in automobile, motorcycle, truck, premises liability and negligent security cases. In addition to the work on behalf of his clients, Mr. Earle serves as an Elder at Ponte Vedra Presbyterian Church and also works to support the mission of Overseas Council in training Christian leaders in Cuba and around the world. Mr. Earle has been blessed with his wife, Cari, two daughters, one son, and two West Highland Terriers who enjoy the year-round outdoor activities on the water and the lands of our beautiful state.