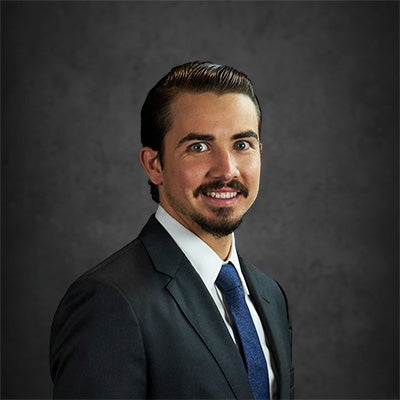 Antonio Luciano is a personal injury trial lawyer. Raised in Jacksonville, Florida, Mr. Luciano takes pride in representing the people of his hometown as well as those throughout the State of Florida. Mr. Luciano attended Terry Parker High School before leaving Jacksonville for Tallahassee, where he earned his Bachelor of Arts in Advertising and his Juris Doctor from the Florida State University. After graduating with honors, Mr. Luciano returned home to join Morgan & Morgan in the firm's Jacksonville office.

In 2013, Mr. Luciano began litigating lengthy high stakes cases on behalf of Florida residents and their families against the major U.S. tobacco companies for their 50 years of negligence, fraud, and conspiracy. In that time, the Morgan and Morgan Tobacco Team secured jury verdicts exceeding five, ten and twenty million dollars, including punitive damages.

Mr. Luciano is a passionate advocate for individuals injured by others and for fighting against injustice regardless of the form it takes. He has participated in personal injury trials ranging from auto negligence to medical malpractice, and has tried cases across the State, including in Duval, Leon, Palm Beach, Lee, Monroe, Orange and Volusia counties.

As a proud husband and father of a young son, Mr. Luciano strives to fight for his clients the same as he would for his own family.