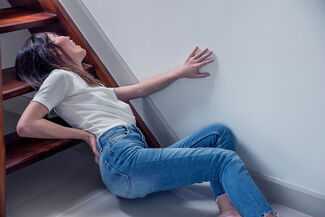 One out of five falls causes a serious injury, such as broken bones or a head injury, according to the Centers for Disease Control and Prevention. These types of accidents can not only hurt you physically but also financially. Medical costs for these injuries are $31 billion annually, with hospital costs accounting for two-thirds of the total.

If you or a loved one was injured in a slip and fall accident, we may be able to help. To find out what our attorneys may be able to do for you, please fill out our free case evaluation form today.

Have you ever been walking along a sidewalk or walkway and taken a spill? Maybe a step was uneven or there was ice on the ground, or a root had broken through the concrete. If your accident was due to the negligence of others, it’s vital to determine who should be held responsible for your injuries.
For the owner of a private property to be legally responsible for the trip & fall accidents due to a crack or unevenness in the sidewalk they must have known about the dangerous surface but did nothing about it or reasonably should have known of the dangerous surface and failed to repair it.
Common sidewalk slip and fall accidents occur due to:
If the trip takes place on a public sidewalk, figuring out the liable party becomes more complex. The location of the accident and the city’s laws may place the burden of sidewalk repairs on adjacent property owners, the local government, or may have it split between the two. Let the lawyers at Morgan & Morgan help determine the at-fault parties and ensure you are compensated properly for your injuries.

Every week, children who visit one of more than a dozen Target stores between Ocala and Orlando are treated to free cookies and fresh fruit. As a matter of fact, as the number two discount retailer in the United States, Target gives out 25,000-50,000 free snacks to children per week nationwide. Whether you leave your house and go to the Target on SW College Road to pick up your free cookies or if you frequently stop at the store at the Market Place at Seminole Towne Center to pick up groceries on your way home from work, it’s nearly impossible to drive around the area without passing a Target.
Target has nearly half a million employees in the United States and while they are all given handbooks to be taught the proper procedure to keep customers safe, sometimes mistakes are made. If an Ocala Target's employees create a situation that caused you to slip and fall or if they failed to rectify a hazard and did not repair it in a reasonable time, they may be liable to compensate you for your damages.
Slip & fall accidents in Target stores often result in high verdicts and settlements, including:
Prior verdicts do not guarantee future success so contact Morgan & Morgan for a free, no-obligation case consultation today.
Directions from the Target on E Silver Springs Boulevard to Morgan & Morgan’s Ocala Office:

Elements of an Ocala Slip and Fall Lawsuit

Under Florida law, a person injured in a slip and fall accident must satisfy the following two elements to have a valid claim:
To prove that a property owner knew or should have known about the dangerous condition, your will present evidence that the dangerous condition had existed for such a long period of time that it should have been discovered by the owner of the property if he or she had exercised reasonable care in inspecting the premises.

Other Marion County Communities We Serve