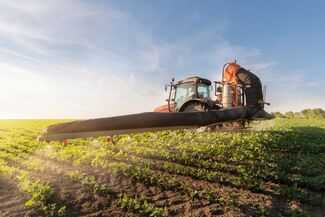 (Update: On June 24, 2020, Bayer-Monsanto agreed to pay $400 million to settle claims that dicamba drift had damaged millions of acres of crops, causing tens of millions of dollars in losses to farmers.

Morgan & Morgan played an essential role in negotiating this settlement, and we are committed to making sure that farmers get the compensation they deserve. If you suffered crop damage and financial losses as a result of dicamba drift, you may be eligible to participate in this settlement. Contact us today to have your case reviewed for free. 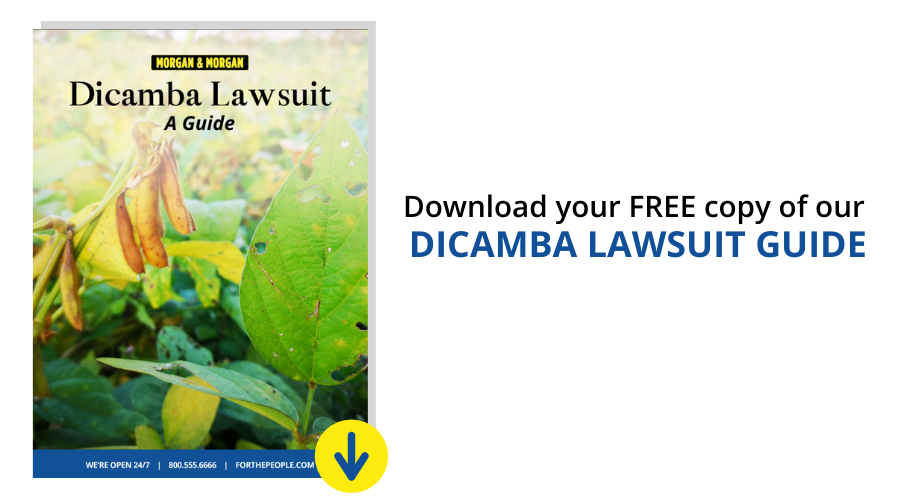 Our attorneys are currently investigating claims that the herbicide dicamba is responsible for destroying millions of acres of crops and endangering the livelihoods of thousands of farmers. The highly-volatile herbicide has a propensity to drift from its original site of use and impact others’ land.

If the crops on your farm were injured by dicamba, contact us today. Federal crop insurance won’t cover crops damaged by dicamba but you may be eligible to file a lawsuit against the herbicide's manufacturers.

Dicamba is a powerful herbicide that was previously not permitted for direct application on crops because of its toxicity and tendency to move off-site and potentially harm other farmers’ crops.

However, the herbicide of choice in the U.S. — Roundup — has been sprayed by farmers to the point that some weeds are now resistant to glyphosate, its primary chemical. Additionally, there have been lawsuits filed against Monsanto, the makers of Roundup, alleging that the weed killer causes lymphatic cancer.

As a result, farmers have turned to dicamba to kill these new “superweeds,” which now grow in  more than two-thirds of U.S. farm acres (61 million acres).

What are the Alleged Problems With Dicamba?

In order to combat the growing problem of Roundup-resistant superweeds, Monsanto developed new strains of soybeans and cotton that would be resistant to dicamba. The EPA however, had serious concerns about Monsanto's proposed new uses for dicamba, which had long been known to be highly volatile and uncontrollable.

The EPA delayed approval of the new dicamba formulations for several years due to its concerns about the chemical’s propensity for off-site movement and the significant harm that it might pose to farmers. It approved three new formulations of dicamba — XtendiMax (manufactured by Monsanto), Engenia (manufactured by BASF), and Fexapan (manufactured by Dupont) — for the 2017 growing season, which were supposedly less likely to be harmful than prior versions of dicamba. However, these dicamba formulations were introduced to the market without independent rigorous testing. As a result, millions of acres of farms have been damaged by these companies, at the farmers’ expense.

There is also evidence to suggest that Dicamba manufacturers knew about the potential for serious and widespread damage to neighboring fields. In leaked emails, employees appeared to joke about the weak science supporting Dicamba’s purported safety, with one even saying that they hoped to “stay out of jail.”

Dicamba is also taking a serious toll on trees, with weakened, dead, or dying trees showing up in orchards, parks, and even on residential neighborhood sidewalks. Some experts say that Dicamba’s damage to trees in recent years is worse than the damage caused by the Emerald Ash Borer Beetle, an invasive pest species that has killed millions of trees across 25 states.

For the 2020 harvest, some farmers are very concerned about continued damage causing serious financial losses. Many have also expressed frustration at the failure of the EPA to do anything to protect them.

If you believe your crops were damaged by dicamba, you may be at risk of significant yield loss. Contact us today to find out if you can file a lawsuit and hold the manufacturers of dicamba responsible for the damage caused to your farm.

Dicamba is more powerful than glyphosate-based herbicides like Monsanto's Roundup, which farmers used before superweeds developed. Farms that don’t plant crops genetically modified to resist dicamba are extremely vulnerable to damage. Signs that your plants have been damaged by dicamba, according to the Purdue Plant & Pest Diagnostic Laboratory, include:

Can I File A Lawsuit If My Crops Were Damaged by Dicamba?

If your crops were damaged by dicamba this year, you could experience a significant yield loss as a result. Our product liability lawyers want to hear from you. Federal crop insurance won't cover the losses that result from chemical drift and a lawsuit may be the only way to recover compensation. Contact us today.

Are fields in my area being damaged?

Dicamba drift has happened in 25 states, including most of the primary farming areas in the country. Give us a call to help confirm if your crop damage is linked to dicamba application in neighboring fields.

Would a dicamba lawsuit be against my neighboring farmer who applied dicamba to his field?

No, Morgan & Morgan is only pursuing lawsuits against the manufacturers of dicamba at this time. Our belief is that manufacturers like Monsanto, BASF, and DuPont should have done more to warn farmers buying their product about the potential for dicamba to drift and damage neighboring fields. We believe that it is them, not the farmers who applied the herbicide, that bear primary liability for the damage caused.

What kind of compensation could I receive?

If your case is successful, you may be awarded compensation for:

Can I afford to hire a lawyer?

Absolutely. Morgan & Morgan operates on the contingency-fee model, which means we only get paid if we win. There’s no upfront fee, and you’re not charged for any costs or fees during the case. No matter your financial situation, you can always afford top-quality legal representation