“For The People” Scholarship Winner Announced 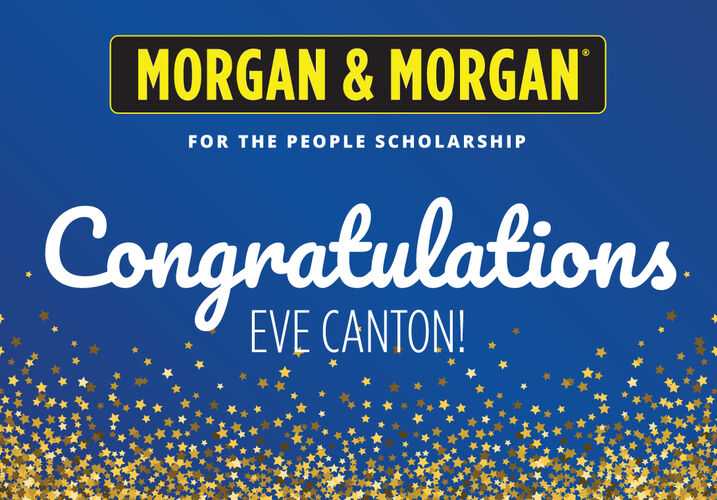 Morgan & Morgan is proud to announce that Eve Canton of Southwestern Law School is the winner of our 4th annual For The People Scholarship. As the winner, Eve will receive $5,000 towards her law school tuition.

“For The People” is more than a slogan at Morgan & Morgan — it’s our primary principle. We fight on behalf of those who can’t take on the powerful alone, and our yearly scholarship goes to a law student we feel is ready to take on that fight.

For this year’s scholarship contest, applicants were asked to submit an essay describing what “For The People” meant to them, and how they would apply it in their legal career. We received many great submissions, but Eve’s winning essay shone through and was selected on the strength of the clarity of purpose she communicated.

Eve Canton: An Instinct to Serve

Eve framed her essay around an incident that occurred when she was just 11 years old, when she determined that the woman working at her local convenience store was suffering from domestic abuse. Eve was able to connect the woman with aid resources, and even convinced a family social worker to get involved. Eventually, the woman and her children were able to leave their abusive situation.

This incident left Eve with the feeling that she could be a force for positive change for those around her. Though she grew up in an underprivileged neighborhood and in a household that lacked financial resources, this optimism never left her. When she participated in a mock-trial in her junior year of high school, she realized that law was her path toward making her dream of helping others a reality.

“I am a firm believer that through advocacy, social change is possible, and that law is perhaps the most powerful mechanism to create both large and small-scale social improvements,” Eve told us. Though she first established a career in marketing, Eve’s passion for the law eventually led her to apply and be accepted at her first-choice school, Southwestern Law School.

Eve tells us that there are many ways to use her law degree for good, whether she practices family law, becomes involved in government, or works in public policy activism. Whatever she does, she says is “committed to advocating for the people, representing the people and uplifting the people who need it most.”

Thanking All the Applicants

We’d like to thank everyone who participated in this year’s “For The People” scholarship essay contest. Though there’s only one winner, almost every essay we received was filled with passion for the law and a commitment to using its power for good.

That passion and commitment is inspiring to us as a firm, and especially those of us who got to read each and every essay. It’s a wonderful feeling to realize that you are not alone in your mission to work “for the people.”

Thank you again to all of our applicants, and we wish you nothing but the greatest luck and success in law school and your legal careers.