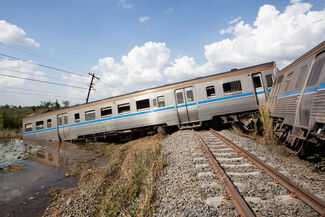 Every few weeks, it seems, there’s news of yet another tragic, high-profile train crash that ends up injuring or even killing several passengers.

The truth is, there has been an abundance of passenger train accidents across the country in recent years, causing the millions of people who rely on Amtrak, commuter rail, subways, and other passenger trains for their daily commute to worry about the state of railroad safety in America.

Too often, these train accidents are caused by acts of sheer negligence on the part of a rail company, such as deteriorating track conditions that go unrepaired, equipment left on the rails, dangerous speeding through hazardous curves, or engineers who are distracted or fatigued while operating the train.

These mistakes can have devastating consequences for the passengers and crew riding the train in the form of broken bones and fractures, back and neck injuries, traumatic brain injuries, spinal cord injuries, burns, and other life-threatening injuries.

Even innocent bystanders and those living in homes near train tracks can be hurt or killed by a train careening off the track. In fact, nearly 1,000 people are killed in train accidents each year, and thousands of passengers suffer serious injuries annually, according to the Federal Railroad Administration.

If you or someone you love was recently injured or killed in a train accident, our attorneys may be able to help you recover compensation for your injuries, pain and suffering, and other damages resulting from a crash or derailment. Fill out our free, no-risk case evaluation form to learn more today.

There have been a number of serious train accidents and derailments in recent years, including:

There are multiple factors behind the recent train crashes and derailments we’ve seen on the news, but many of them share common examples of improper train handling, train operator negligence, and poor maintenance of the trains and tracks.
In many of the deadly train crashes that have occurred over the past few years, the trains were traveling at speeds well above the speed limit, even when approaching hazardous curves that require train engineers to slow down to safely navigate them.
Investigators found that the train involved in the 2017 Washington State Amtrak derailment was traveling 80 mph in a 30 mph zone. In the fatal 2013 Metro-North crash in the Bronx, the train involved was reportedly traveling 82 mph when it approached a sharp curve in the rail system.
In the case of the 2018 South Carolina Amtrak crash that killed two people, a railroad switch was reportedly set in the wrong position, diverting the train onto another track where a stationary freight train was parked.
Other train derailments in recent years, such as the 2016 NJ Transit crash in Hoboken and the 2017 Long Island Rail Road crash in Brooklyn, have been attributed to the operator or engineer of the train suffering from sleep apnea — a sleep disorder also linked to fatigue-related fatal trucking accidents.
These accidents have caused train safety advocates and lawmakers to call for improved infrastructure maintenance and mandatory sleep apnea testing  for engineers, as well as the implementation of advanced rail safety systems like Positive Train Control, which can automatically stop a train before accidents occur.

How Can a Train Accident Attorney Help Me?

Victims of train accidents often suffer traumatizing, life-altering injuries that require costly medical attention and treatment, as well as time away from work recovering. A train accident attorney can help you recover compensation for medical bills, lost wages, and other damages by determining liability after the accident.
While many train accidents are caused by a railroad company’s negligence, proving fault after an accident is much easier said than done. The federal and state laws surrounding railroad safety are complex and there multiple federal agencies that regulate railroad safety and investigate railroad accidents.
An experienced attorney knows the ins and outs of these laws, and can conduct an investigation on your behalf to determine if a railroad company and its employees violated any laws or operated its trains in an unsafe manner that caused the train crash or derailment.

Our attorneys handle a variety of train accident cases involving acts of negligence by rail companies, including but not limited to:
In some cases, a manufacturer may be found liable if the train accident was caused by some manufacturing defect with the train or rails, rather than negligence on the part of the company who owns the trains or railways. A train accident attorney can help investigate the cause of the crash or derailment and determine the liable party.

There have been a number of victories for the train accident victims and their families seeking justice and accountability for these preventable crashes and derailments.

What Compensation Can I Recover in a Train Accident Lawsuit?

Train accident victims who participate in a lawsuit can pursue monetary compensation for their injuries in the form of economic, non-economic, and sometimes punitive damages.
Economic damages compensate the injured victim and their family for their monetary losses, such as:
Non-economic damages compensate the victim and their family for non-financial, intangible losses, such as:
Punitive damages, on the other hand, may be awarded if the defendant’s actions causing the accident were willful, malicious, or intentional, in order to punish the offender and dissuade similar conduct in the future.

Injured in a Train Accident or Derailment?