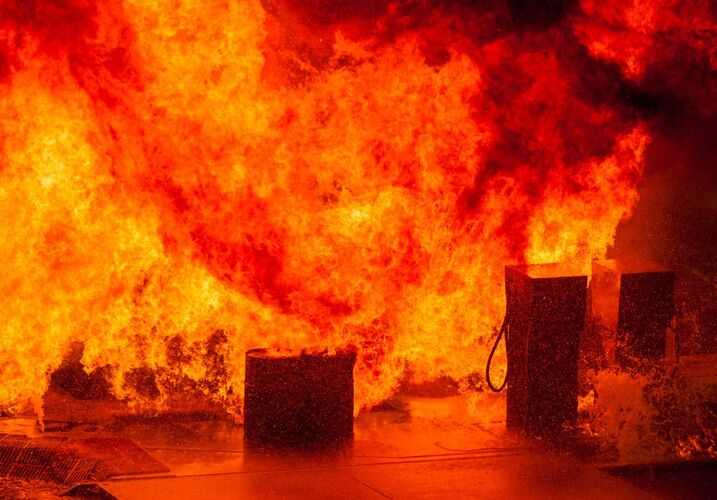 The fire spread from boat to boat{: target=_blank} until flames engulfed an entire dock, according to Tulsa Public Radio. Firefighters spent about six hours containing the fire before finally extinguishing it that afternoon.

Temperatures in the Lake Texoma area reach 100 degrees regularly, and firefighters overheated during the battle.

#BREAKING: Several boats are on fire after a reported explosion on Lake Texoma https://t.co/4pQYl285lj pic.twitter.com/n1L0mOnMsv

Fortunately, none of the responders suffered injuries, but a contractor possibly burnt their hand{: target=_blank} during the fire’s onset, deputy fire chief Trenton Gray North Texas Regional Airport — Perrin Field told the Herald Democrat. Many of the boats were unsalvageable.

“We’re still trying to get water on them, but the majority of the boats will probably end up sinking,” Gray said about halfway through the fight. “There’s no other way that we’re going to be able to get them out before they do sink.”

Authorities aren’t sure how the fire began, but boats present a serious danger in a perfect storm of circumstances. Fires, burns, accidents, and other injuries are all on the table.

Marinas and docks host boats, some large enough to live on for several days. Many are partly made with wood or other flammable material, but the majority meet stringent safety requirements like stowing life vests aboard and maintaining proper engine ventilation. A fire extinguisher must be present{: target=_blank} if a fire hazard can be expected, according to the U.S. Coast Guard.

Burns caused by fires are a serious health concern, but many people forget widespread fires have the potential to cause injury or damage with their smoke too. Smoke inhalation is profoundly dangerous, playing at least a small role in 75 percent of fire-related deaths. But smoke can be trouble on its own.

A surprising 51 percent of all fire-related deaths{: target=_blank} are due to smoke, according to the National Fire Protection Association.

In circumstances like a fire, businesses and their insurance providers clamber to limit their liability. Factors like storing boats too closely together, leaving your dock or marina understaffed, and failing to install and maintain fire suppression tools required by local and federal regulations can all create liability for a boat storage facility. This can be an important, if someone sustains a burn injury during the fire.

An attorney specializing in a variety of personal injury fields can be a strong tool in your quest for justice.

Right now, investigators are searching for the cause of the marina fire.

Feature photo not of the dock described.