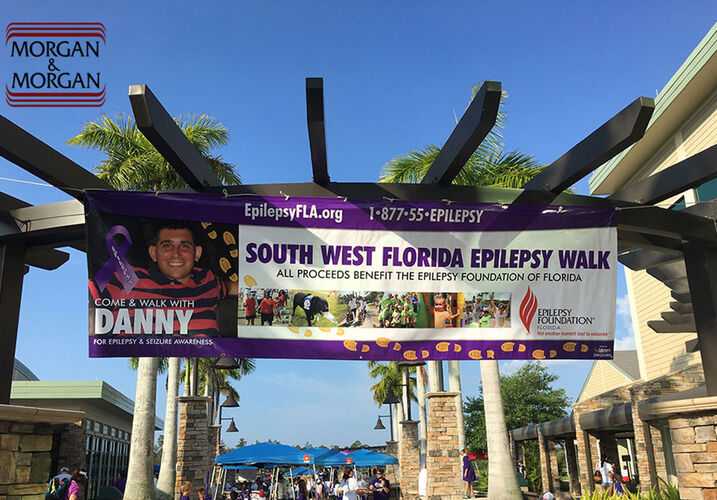 Saturday may have been April Fool's day, but people in Naples got together to support a cause that is no joke — epilepsy awareness.

The Epilepsy Foundation of Florida hosts Walk the Talk for Epilepsy every spring in eight cities across the state in order to raise funds to find a cure and overcome the challenges epilepsy creates. On Saturday morning, Naples hosted its version of the annual walkathon in North Collier Regional Park.

The goal of this year’s event was to raise $50,000 on behalf of the EFOF. The walkathon managed to raise an impressive $45,955 and donations are still open!

At Morgan & Morgan, we value the cities that our offices call home, and find it important to participate in events that make a difference in those communities. As a result, staff members at our Ft. Myers office wanted to donate to this cause. Every month, staff members donate a few dollars for the option to wear jeans on Friday. At the end of each month that money is collected and donated to a charity. This year, our Ft. Myers office decided to donate all their proceeds from the months of February and March to the Walk the Talk for Epilepsy.

In addition to donations made by the staff in Ft. Myers, the firm made a $5,000 donation. We are proud to have been the top corporate team and one of the two gold sponsors for the event.

Epilepsy is a cause close to our firm's heart. Studies suggest that medical marijuana could be a viable treatment for the disease. Our founder, John Morgan, led the radically successful campaign to legalize medical marijuana in Florida with a constitutional amendment, which passed with 71 percent of the vote on Election Day, 2016.

If you would like to contribute to the walk, there is still time. While you can always donate to the EFOF on its website, donate buttons are still open on the Walk the Talk for Epilepsy in Naples website. The walk is just a few thousand dollars short of its goal and with a little more help from people willing to donate, the fundraising goal can still be met.