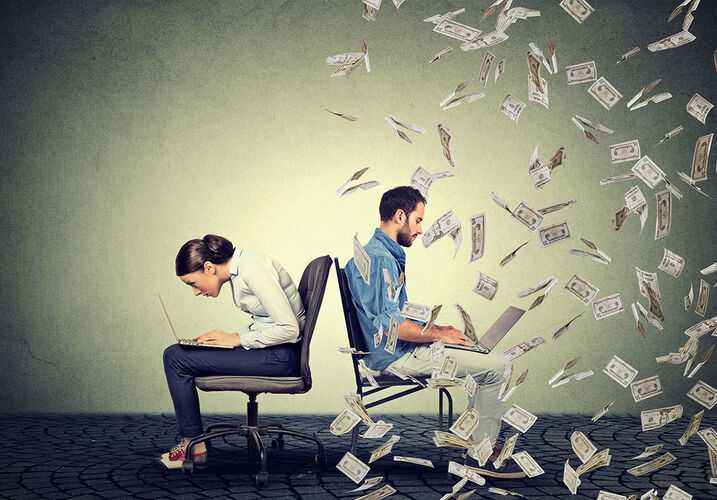 Kristen Bell spears the issue of the gender wage gap in her hilarious short “Pinksourcing” for The Huffington Post’s latest series, “Celebs Have Issues,” where celebrities use their comedic chops to tackle important societal issues. And while her satirical take on women’s unfair treatment in the workplace has rightfully gone viral, it echoes a common and potentially harmful myth: that women don’t receive raises simply because they are too afraid to ask for them.

“They’ll never ask for a raise and they don’t complain about their working conditions” jokes Kristen Bell in the video, referring to women as America’s most affordable workforce. But a new study of 4,600 employees at 800 organizations in Australia shows otherwise. In this study, women asked for raises just as often as their male peers, but were 25 percent less likely to be granted a bump in pay.

The study "Do Women Ask?" is the first of its kind to examine whether women get paid less because they are not as pushy as men. The study is like-for-like, meaning men and women of similar work qualifications, job type, and job tenure were compared as a control. Men in this study successfully received a raise 20 percent of the time, whereas their female peers were successful only 16 percent of the time.

Kristen Bell certainly isn’t wrong about the gender wage gap, but the reasons behind it are more worrisome than a woman’s fear of asserting herself in salary negotiations, also known as the “reticent-female theory,” and are beyond her control.

"Having seen these findings, I think we have to accept that there is some element of pure discrimination against women," Andrew Oswald, professor of economics at the University of Warwick and co-author to the study, explained to CNN Money.

Pay discrimination occurs when employees with substantially equal work tasks do not receive the same pay for their efforts, due to illegitimate bases such as race or sex, according to advocacy organization Workplace Fairness. This practice was prohibited by the Equal Pay Act of 1963. And although the EPA was passed over half a century ago, many women still do not earn equal salary to their male peers.

So if you’re in the midst of negotiating for a raise, and you find yourself experiencing what you believe to be pay discrimination in the workplace, what can you do about it?

If you believe you have experienced pay discrimination, creating a paper trail is essential. Record the date, time, location, people involved, and details of the incident. Be sure to also collect records of your own work performance, such as performance reviews, along with copies of your salary records and pay stubs, as recommended by Workplace Fairness.

Consult with an Attorney

Attorneys are trained to handle cases involving workplace discrimination and unfair labor practices, including harassment, discrimination, and denial of equal pay. Along with helping you to file a lawsuit, an experienced attorney can guide you through the administrative process of filing a complaint with the Equal Employment Opportunity Commission or your state’s equal employment agency. As an attorney can help you draft the best complaint to aid your case, it’s best to consult with an attorney before filing your complaint with the EEOC.

File a Complaint with the Equal Employment Opportunity Commission

The Equal Employment Opportunity Commission is responsible for overseeing compliance with anti-discrimination laws. A formal complaint must be registered with the EEOC in order file a discrimination lawsuit. After you and your attorney file a complaint with the EEOC, or your state’s equal employment agency, the agency will contact your employer. The process afterward can involve mediation, settlement, an investigation into the complaint, or a lawsuit.

Record Any Instances of Retaliation

Although retaliation against an employee who files a charge of discrimination is illegal, it can still happen. Retaliation cases now exceed claims of racial discrimination and make up 45 percent of complaints filed with the EEOC. If you file a complaint with the EEOC, be mindful of any instances of retaliation, such as demotion, harassment, threats, or punishment afterward, and record them, as it may serve to help your case.