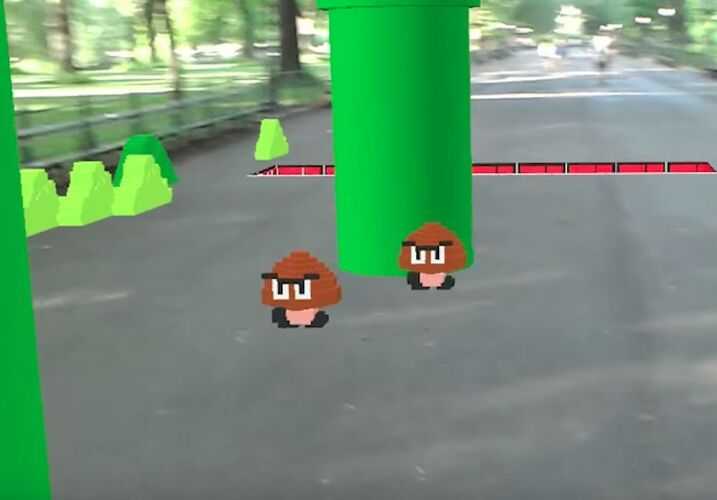 The Super Mario Bros. franchise has been cool since the game was released in the ‘80s, but one man created a new augmented reality version of the game that takes things to a whole new level. While the game isn’t available to everyone, gamers can get excited about a future possibility of playing video games in a real-world setting.

Developed by Abhishek Singh, a graduate student at NYU, the game requires a virtual reality headset, which superimposes images onto real world surroundings. For example, where there was once a walking path, a player might see a pit with water they need to jump over.

To demonstrate just how well the game works, Singh dressed up as Mario and made a video of himself playing it in Central Park. The video is very cool, and you can check it below.

Still, despite the game's awesomeness, there are concerns about the dangers of augmented reality. After all, unlike standard video games or virtual reality, with AR players are still interacting with the real world. This could mean players could injure themselves and others around them. It’s a danger far worse than some flying turtles and fireballs.

Unlike the Game, the Danger is Real

Even though headsets and augmented reality games have yet to take off with the masses, we’ve seen glimpses of just how promising this technology is.

Just a year ago, Pokémon Go took the nation by storm in the form of an augmented reality game for mobile phones. For months, people around the country scanned every inch of ground around them with their phone's camera in attempt to catch em’ all.

Unfortunately, some people were so consumed by the game that they lost track of what was going on around them and suffered bruises, broken bones, and even car crashes. In one extreme case, two California men in their early 20s walked off a cliff by mistake while playing the game.

The dangers will only grow as augmented reality games become more advanced and popular.

Even though superimposing computer images on the real world is extremely cool, the danger is easy to see. With a game that has unlimited possibilities, you could take the fun anywhere, even the middle of the street. While that sounds far-fetched, consider how smartphones have caused an uptick in distracting driving.

Now imagine how much more distracting a headset that projects images on top of the real world around you would be. It’s not so far-fetched anymore for someone to mistakenly step into the street or onto another person’s property when they’re intent on completing a level or catching a Pokémon.

Even more concerning is how augmented reality games could affect the people around who are not playing a game. Today, someone wearing a VR/AR headset in public and hopping over things that aren’t there looks strange, but it’s harmless to others. As you can see in the video, Singh isn’t hurting anyone who’s crossing his path as he plays the most famous video game character in the world.

What happens, though, if the game begins superimposing images near other people? Could someone wearing a virtual reality headset injure another person by mistake while they charge through the park in an attempt to beat a game in record time? Or worse? What if an engaged player ends up in the street and a car crashes into them? What if the player tries to drive with the headset on?

To avoid this, augmented reality games should limit where images can be superimposed on the real world. The street and other people would be a good start, but boundaries to avoid trespassing on other people’s property may also be another safety precaution worth including. Until then, there is a serious potential for someone to sustain a personal injury by accident.