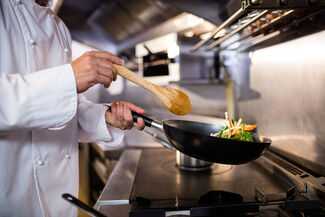 Typically, food poisoning lasts only a few hours or a few days. But in some cases, a food poisoning outbreak may make several to hundreds of thousands of people sick. Symptoms range from upset stomach, nausea,  and stomach cramps to fever, diarrhea, and vomiting. Symptoms may be mild or severe and could take several hours or days to show up. If you believe you are suffering from food poisoning, fill out this form for a free case evaluation.

When to See Your Doctor

Usually, food poisoning resolves itself after some time. However, serious cases may require medical intervention. You should see your doctor if you have:

Some of the more common types of food poisoning include:

If you believe you have food poisoning or a related illness, contact Morgan & Morgan immediately — you may be eligible for financial compensation. With more than 500 attorneys nationwide and billions of dollars recovered, we have the resources necessary to give you the best service possible. If we move forward with your case, you’ll get a full team of lawyers and legal staff, as well as 24/7 open communication with us via our mobile app.

All law firms are not the same. The food poisoning lawyers at Morgan & Morgan are passionate about fighting for the rights of victims and obtaining the justice and compensation they deserve. At Morgan & Morgan, there are no upfront costs. We never charge by the hour — you pay us only if we win.

Fill out this form today for a free case evaluation from a food poisoning attorney.