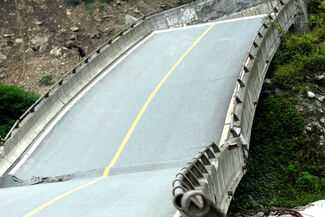 While driving over a bridge or overpass, you’re probably not worried that it will collapse. This is for good reason — bridge collapse accidents occur very infrequently. In the rare instances a bridge does collapse, however, people can be injured or killed, and lasting images of mangled steel and concrete are plastered all over the news.

Much goes into building a bridge, and if the designer, contractor, or subcontractor make even one mistake, the consequences could be deadly. Additionally, they require maintenance after completion and must be regularly inspected to ensure they remain safe. If these very necessary steps are not taken during construction and after completion, it could lead to a collapse.

At Morgan & Morgan, our personal injury attorneys have experience dealing with with a wide variety of practice areas, including bridge collapse accidents. Matt Morgan filed the first pedestrian bridge collapse negligence lawsuit after the Florida International University bridge collapse in Miami against the companies involved in the construction of the structure. Morgan is representing a survivor of the collapse who was injured when the 950-ton concrete pedestrian bridge fell.

If you or a loved one was injured or killed in a bridge collapse accident, our attorneys may also be able to help you and your family hold the responsible parties accountable. You could be eligible for compensation for medical bills, pain and suffering, loss of quality of life, among other damages. Contact us today for a free case evaluation to learn more.

Should You Fear Driving Over a Bridge?

As of 2016, there were 614,387 bridges in the United States, almost 4 in 10 of which were 50 years or older, according to the American Society of Civil Engineers (ASCE) bridge report{: target="_blank"}. The same report determined that 56,007 of those bridges were structurally deficient and that 188 million trips were taken daily over them.

Therefore, commuters should not fear that the bridge they cross every day is in imminent danger of collapsing. Those responsible must be proactive about inspecting and repairing bridges, however, to ensure there isn’t a preventable tragedy.

Who Can Be Injured in a Bridge Collapse?

That’s what happened at FIU.

Thankfully, though, the bridge was not open to the public, otherwise FIU students and other Miami residents could have been killed or injured in the collapse. Those below the structure were not as lucky. Even though it was not open to the public, the street below wasn’t closed, and motorists and pedestrians were killed and injured when the pedestrian bridge collapsed.

Aside from unsuspecting motorists and pedestrians, construction workers can also be injured in a collapse if it occurs during construction. While hard hats can lessen the trauma caused by falling debris, they are no defense against large pieces of steel and concrete.

Severe brain injuries, spinal cord injuries, severe lacerations, and bone fractures are just some of the injuries a construction worker, pedestrian, or motorist can sustain in a bridge collapse.

Who Can Be Held Responsible for a Bridge Collapse Accident?

Bridges are maintained by each state’s Department of Transportation unless it’s owned by federal agencies or private entities. Still, the responsibility for a bridge’s failure will likely fall on a number of organizations, including the designer and builder in some cases.

The statute of limitations will likely protect the bridge designer and builders if the bridge collapses many years after it’s constructed. In cases like what happened at FIU in Miami, more parties may be held accountable because the bridge was recently constructed and not even open to the public at the time it fell.

If a construction worker is injured in a bridge collapse, they can file a workers’ compensation claim with their employer and collect money for medical bills, lost wages, pain and suffering, among other damages. They may also be able to file a third party lawsuit if a lawyer can determine that a party other than the construction worker’s employer contributed to the accident.

In the most severe accidents, in which construction workers are killed, their loved ones could file a wrongful death lawsuit against the responsible parties. Even though a lawsuit will not bring back a family member, it can provide them with compensation for expenses related to their loved one’s death and ease the financial strain it may create.

Are You Eligible to File a Bridge Collapse Lawsuit?

At Morgan & Morgan, our attorneys have experience handling bridge collapse accident cases. This experience allows us to help those who reach out to us without delay. A prime example of this was in the tragic incident at FIU, in which we were the first to file a lawsuit against the responsible parties.

Ultimately, the faster we begin the legal process, the faster you can receive the compensation you may need and certainly deserve. To learn more about how our bridge collapse lawyers may be able to help you after an accident, contact us today for a free, no-obligation case review.