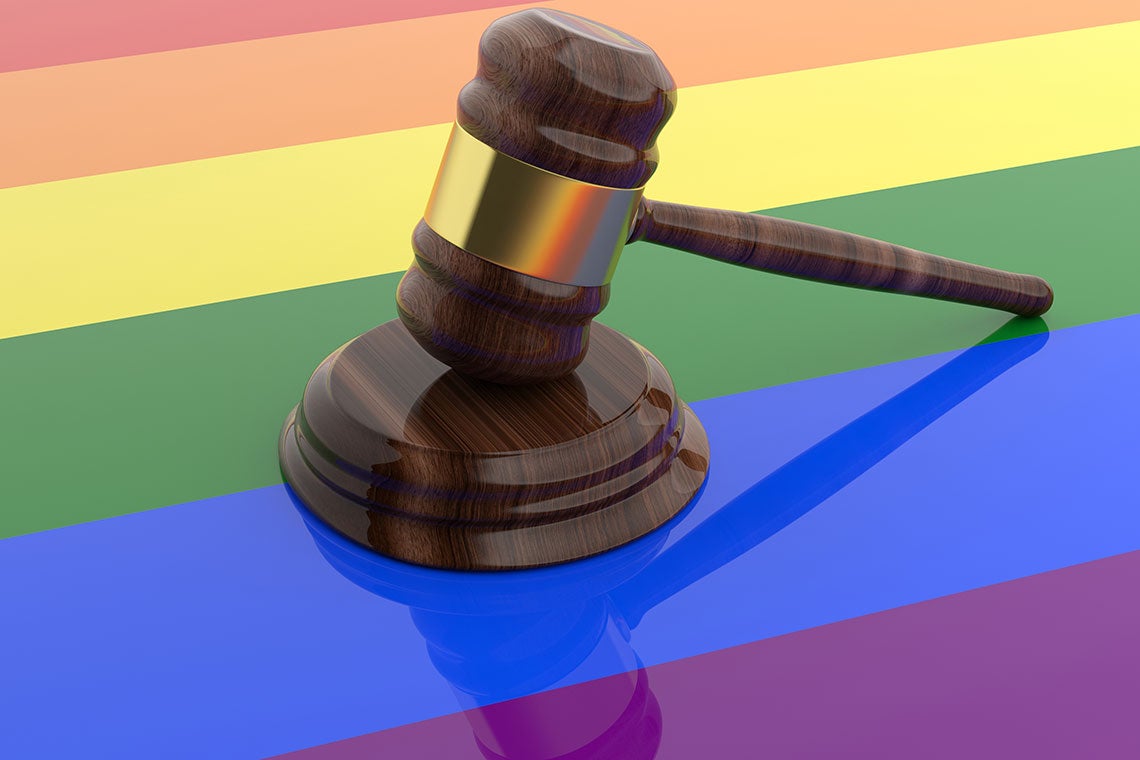 [Update, April 5: The Seventh Circuit ruled Tuesday that the Civil Rights Act of 1964 provides protection from discrimination on the basis of sexual orientation, the first appellate court to officially rule this way. The panel of judges, consisting of Seventh Circuit's entire bench, broke 8-3 to reverse their previous decision in favor of Ivy Tech Community College and rule in favor of the plaintiff, Kimberly Hively. The next move would be for Ivy Tech to appeal to the Supreme Court for a final decision.]

In a big victory for preventing sexual orientation discrimination, the U.S. Court of Appeals for the Second Circuit issued a ruling that appeared to lean toward interpreting the landmark Civil Rights Act of 1964 as outlawing discrimination against LGBTQ employees. The move, which is the latest court decision to potentially consider that interpretation, allows a gay man to proceed with a suit filed against his employer for failing to protect him from workplace discrimination.

On Monday, the court determined that Christiansen, an employee of Omnicom Group—a global marketing and communications company—could continue to sue Omnicom after repeated instances of sexual orientation discrimination from one of its senior employees. The U.S. District Court for the Southern District of New York previously dismissed Christiansen’s case.

Christiansen sued Omnicom for discrimination{:target="_blank"} under the Americans with Disabilities Act of 1990, Title VII of the Civil Rights Act, and several state and local laws, according to the Court’s decision. The Second Circuit based its decision regarding Christiansen’s suit largely on the protections provided in Title VII.

Title VII covers employment rules established in the Civil Rights Act of 1964{:target="_blank"}, which outlaws discrimination in matters of employment, compensation, and more based on “race, color, religion, sex, or national origin.”

Though Christiansen’s case is far from over, the court’s decision ostensibly removes a major obstacle for future LGBTQ discrimination cases and means a great deal for workplace protections.

‘They Were Crude and Disgusting’

The lawsuit alleges Omnicom’s Chief Digital Officer Joe Cianciotto repeatedly harassed Christiansen, drawing inappropriate caricatures and making lewd or disrespectful comments. Christiansen told Slate{:target="_blank"} about the caricatures: “They were crude and disgusting—rendering me as half-man, half-horse, pooping and peeing, or as an overly pumped gay guy... saying, ‘I’m so pumped for marriage equality.’”

Cianciotto allegedly made repeated references to HIV/AIDS, suggesting Christiansen contracted the disease. Christiansen’s attorney Susan Chana Lask alleged Cianciotto discriminated against Christiansen from his first day on the job in this fashion, according to Slate. Though Christiansen is HIV-positive, he hadn’t made that information public yet, the report said.

While his lawsuit was pending, Christiansen allegedly continued to face questionable behavior from his employers. He told Slate that “the company also asked me to write a Pride campaign for them while I was suing them for discrimination!” Had he refused, he believes the company would have grounds to dismiss him.

This kind of behavior can be dangerous to one’s career, mindset, and wellbeing. Fortunately, the court found grounds to reinstate Christiansen’s case against Omnicom.

Price Waterhouse v. Hopkins was a situation in which the accounting firm Price Waterhouse allegedly discriminated against an employee named Anne Hopkins by gender stereotyping similarly to the treatment Christiansen faced. Hopkins’s coworkers allegedly demeaned her for not being feminine enough, discriminating against her based on appearance.

In a concurring opinion with the Christiansen decision, Chief Justice Robert Katzmann revisits previous cases that the Second Circuit has overseen and some of the Supreme Court’s rulings, which found that an action is sexually discriminating if “but for that person’s sex” the action would be different. Concurring opinions are not binding rulings, but instead an opportunity for a judge to provide more insight into their decision.

Katzmann references the U.S. Equal Employment Opportunity Commission’s guidelines, which observe that because sexual orientation can only be understood in the context of one’s sex, discriminating against one’s orientation is in fact sexual discrimination.

He also argues that sexual orientation discrimination is “inherently rooted in gender stereotypes,” and that the Supreme Court’s landmark Obergefell v. Hodges decision about marriage indicates a desire to afford more legal protections to LGBTQ individuals.

Katzmann’s opinion would seem to indicate he believes sexual orientation bias is already illegal everywhere based on the present interpretation of the Civil Rights Act.

Bright Future for Protections from Bias

The Second Circuit's decision in this round could bring more LGBTQ anti-discrimination cases to the forefront of the legal system. The decision could lead to a Supreme Court decision affecting the entire nation, Chief Justice Katzmann suggested at the end of his opinion.

Morgan & Morgan focuses considerable resources on pursuing justice For The People, including those who suffer discrimination in the workplace. Our attorneys are experienced in fighting for justice for those who've suffered bias in the workplace, and may be able to help you with your claim.

Employers sometimes discriminate based on race, sex, religion, age, color, or national origin, despite your protections under Title VII. Contact us today if you believe you’ve faced these kinds of discrimination in the workplace.