People with Disabilities Have a Right to Vote, too, Federal Law Says 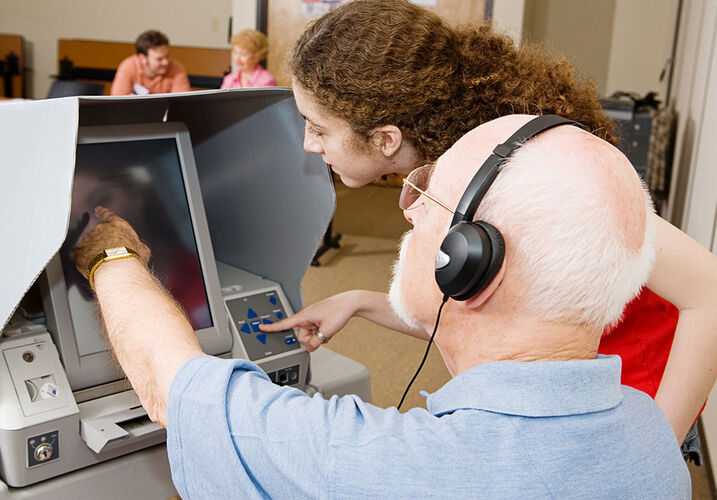 If you are a person with a disability, you may be wondering how the ADA protects your right to cast your ballot on Nov. 8. Today, we outline a few ways this landmark legislation is helpful.

Under the ADA, state and local governments are required to make their polling places accessible by removing architectural barriers and other design elements that would prevent a person with a disability from being able to enter and exit the building.

The following requirements are all part of how the ADA ensures that no one is prohibited from being able to vote.

Once a person arrives at their polling place, there must be an accessible route into and out of the building. This requires curb ramps, a sidewalk or route that is at least 36 inches wide to allow clearance for a person using a wheelchair, and ramps over any steps.

Wall fixtures and objects that protrude into the accessible path to or within the polling place building can pose a hazard to people who are blind or have vision loss. In order to ensure the polling place is accessible and safe, it may be necessary to place skirting or a fence around these objects, which can be detected by a cane.

Easy Passage within the Voting Area

The voting area must also be accessible and allow those using a wheelchair to have clearance to independently maneuver from the check-in table to the voting machine to the exit. This may require the voting area to be held in a large space, such as a lobby.

Any election, whether it is local, state, or federal, must be conducted in a way that allows effective communication with voters with disabilities through auxiliary aids and services. This means that information is given to and received from the person with a disability in a way that allows them to fully participate in the election process just as any other citizen would.

Auxiliary aids and services can take many forms, depending on the person with a disability’s preference and request. For a voter who is blind or has vision loss, ballot overlays, large type on the ballot, information technology, or recorded text and telephone voting systems can be an acceptable form of effective communication. For a voter with impaired dexterity, such as a person with a muscular disorder, an auxiliary aid and service could take the form of a stylus or ballot marking instrument with a knob that can be more readily grasped.

Regardless if your polling place uses a voting machine or voting booth, there should be at least one accessible voting system in place for people with disabilities, as required by the Help America Vote Act of 2002. This accessible voting system must afford voters with disabilities the same level of privacy that any other voter would receive when casting their ballot, as well as allow a person using a wheelchair the space needed to maneuver into and out of the booth.

Finally, the ADA requires the polling place to modify its anti-discrimination procedures and practices to allow reasonable accommodation for individuals with disabilities who are voting. This can mean modifying a “no animals/pets” policy to allow a person with a disability who relies on a service animal to enter the building, or allowing alternate forms of ID for people who are blind or have vision loss, as they are may be ineligible to receive a driver’s license in their state.

Federal law also allows voters with disabilities to be accompanied and assisted in the polls by a person of their choice, which all election officials and poll workers should be trained to recognize before Election Day, according to the U.S. Election Assistance Commission.

Make Your Voice Heard on Nov. 8

The strength of our democracy depends on all citizens making their voices heard on Election Day. On Nov. 8, rest assured that the ADA protects your fundamental right to vote. If you have any concerns about your rights under the ADA, we're here to help.

Note: This is part of a series on Election 2016. Previously, we wrote about how a judge extended Florida's voter registration deadline by a week because of Hurricane Matthew. Our next post covers a big question: Is your employer required to give you time off to vote?