The United States experiences more tornadoes than any other country in the world. Each year in the U.S. approximately 1,200 of these violent storms touch down, killing an average of 60 people, injuring 1,500, and causing $10 billion in property damage.

Tornado prediction technology has improved, but it is still very difficult to know when and where a tornado will strike. Within minutes a storm can appear and disappear, leaving a trail of devastation in its wake and leaving property owners to deal with a damaged or destroyed home or business.

The good news for owners following tornado losses is that the damage should be covered by insurance. Unlike other natural disasters such as floods, earthquakes, and sinkholes, tornadoes are covered under a basic homeowners or commercial property policy. That doesn’t stop insurance companies, however, from denying and underpaying tornado claims. And while a denial might contain a long, technical explanation that makes it seem legitimate, it may in fact not be.

If your insurance company denied or underpaid your claim, we can help. As part of your free case review, our lawyers will look at your insurer’s decision letter and let you know whether there are grounds for an appeal. Contact us to get started.

Over the last few years, some catastrophic tornadoes have struck the United States. The costliest tornado on record, in terms of insured losses, occurred in April 2011 in Tuscaloosa-Birmingham, Alabama, according to the Insurance Information Institute, causing $7.7 billion in damages. Just a month later, an almost equally devastating storm struck Joplin, Missouri, resulting in $72 billion in insured losses.

Tornado intensity is based on the damage it inflicts on buildings using the enhanced Fujita (EF) scale, which rates tornadoes from F0 (light damage; winds 40-72 mph) to F5 (very heavy damage; 261-318 mph winds). The Tuscaloosa and Joplin storms registered as Category F-4 and F-5, respectively, but even weaker tornadoes have winds approaching 200 mph that can destroy a single-family home. 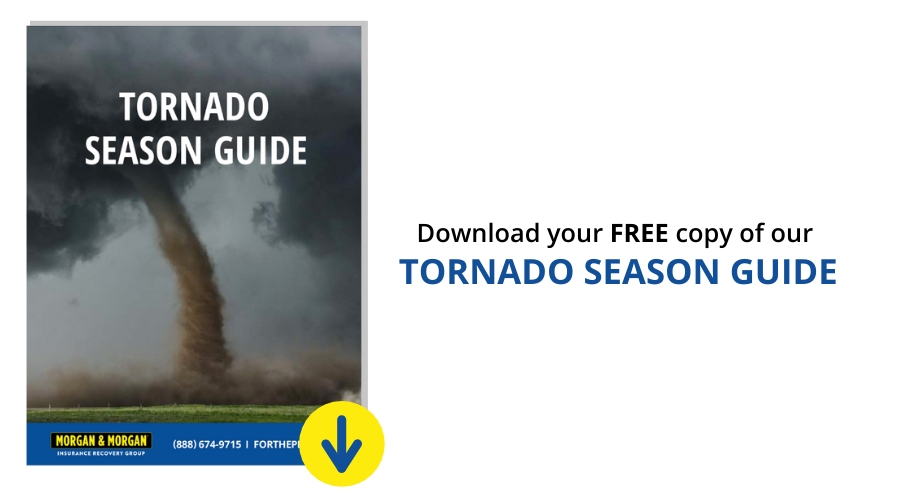 Tornado Losses on the Rise

A report by Lloyd’s of London found that the number of tornadoes reported yearly, as well as annual tornado losses, are increasing. Lloyd’s doesn’t attribute this increase to a greater number of tornadoes, but rather to rural areas becoming more urbanized (leading to more people, homes, and structures in the path of tornadoes) and improved tornado reporting and tracking.

From 2008-2015 tornadoes and other severe thunderstorms caused $10 billion per year in insured property loss damages, according to USA Today. Prior to that period insured tornado and thunderstorm losses never exceeded $10 billion.

Since 1990 more than half of all natural catastrophe losses (including losses to property, vehicles, and agriculture) have been from severe thunderstorms and tornadoes.

An area struck by a strong tornado can resemble a war zone, with leveled buildings, overturned cars, billowing smoke, and debris fields. Although this type of destruction is not uncommon, many tornadoes cause damage more on par with a strong thunderstorm, leaving property in need of repair but not a complete loss. Some common types of tornado damage include:

In addition, tornadoes frequently damage a property’s electrical and plumbing systems and can cause gas leaks.

For more information, check out the website of the International Association of Certified Home Inspectors

What Does My Insurance Cover?

A standard homeowners or business property insurance policy should cover tornado damage to your property and the items inside of it. This includes coverage not only for wind damage, but also damage from hail, rain, and lightning, all of which can accompany a tornado. If your home is so damaged that you can’t live in it, insurance should cover temporary lodging, too.

It’s important for the insured to understand that most policies require the insurance company to pay for the actual cost of replacement of the damaged roof or building, regardless of the age. There is typically no depreciation for age.

In addition, even if your home or building did not sustain catastrophic damage, you may be entitled to insurance coverage for roof replacement and building repairs. Tornadoes often produce damage that is subtle but significant. For example, most roofs have sealant strips that bind the components of the roof together. These strips can be easily broken by high winds and you may not even realize it. Tornado winds also tend to damage fastening components such as nails, clips, joints, and brick ties.

That’s why your property needs to be thoroughly inspected for damage following a tornado. Failure to recognize less-obvious tornado damage could result in costly maintenance down the road.

Educate yourself about these and other less-obvious but serious tornado damages so that your insurance adjuster is sure to investigate them.

Receive a Free Review of Your Claim Denial

Claim denied or underpaid? Our lawyers will provide a free consultation. If your insurance company is doing the right thing, we’ll let you know.

If they aren’t, we’ll help you dispute their decision and obtain the coverage you’re entitled to.

We work with construction contractors, engineers, forensic meteorologists, and other professionals to assist in proving your case. And if we don’t succeed, you pay nothing. Learn more during a no-cost, no-obligation case review.