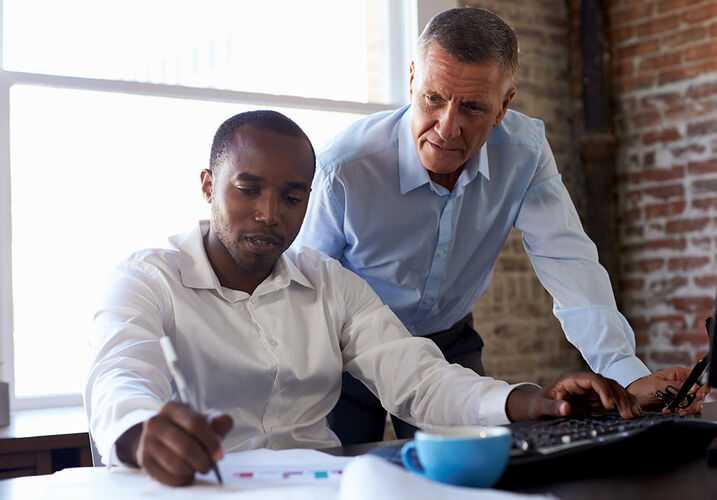 In our youth-obsessed culture, there is no end to the number of stereotypes older workers are up against. But research shows that often they are far from the truth. In fact, in many cases, millennial employees are just as likely or even more likely to exhibit the negative characteristics wrongfully applied to older workers.

The Age Discrimination in Employment Act (ADEA) protects workers 40 and older from wrongful termination or unfair treatment because of their age. Often, ADEA violations stem from these ageist stereotypes.

Here are eight popular myths of older employees and why research proves they just aren’t true.

1. They are unable or unwilling to learn new skills

The myth that you can’t learn new skills past a certain age abounds in offices across America, with many companies fearing that their older workers can’t keep up with the fast pace of change.

According to a recent survey from the authors of The 100-Year Life, 60% of workers 45 and older said they were “actively investing in new skills.”

While younger employees may be able to learn new skills more quickly, older employees bring other cognitive advantages to the office. In a study published in the Journal of Applied Psychology, mature employees tested higher than younger workers for “crystallized knowledge.” This form of knowledge encompasses the skills and facts we learn over time.

2. They are uncomfortable with technology

This stereotype comes with its own buzzword: “digital natives.” Digital natives are employees who grew up with computers and the Internet and are therefore supposed to be naturally superior when using and learning new technologies. Some companies have gone so far as to list “digital native” as a job requirement.

Research from CBRE Group shows that older generations are more likely than millennials to prefer newer forms of internal communication. According to the results, 48% of older employees wanted greater use of social media in the workplace, while only 30% of millennials reported that desire. Millennials on the other hand were more likely than any other generation to desire more traditional methods of internal collaboration like formal meetings and email.

Millennials were more likely than any other generation to desire more traditional methods of internal collaboration like formal meetings and email.

Older workers are also using just as many devices as younger generations. They reported using an average of 4.9 forms of technology every week compared with the average of 4.7 used by their younger colleagues.

3. They are more likely to call in sick

But this doesn’t mean that younger employees are more sickly. Sixty percent of millennials report using sick days when they aren't ill, while only 18% of those 65 and above report doing so.

And, research shows that older employees are actively trying to stay healthy. According to Lynda Gratton and Andrew Scott’s research, 71% of those over the age of 70 try to stay fit compared to only half of those younger than 45.

4. They aren’t creative or innovative

The myth that innovation lies with millennials who have barely packed up their college textbooks is the bedrock of today’s youth-obsessed workplace culture.

A study from the Information Technology and Innovation Foundation finds that an organization’s youngest employees are actually the least likely to come up with the next big idea.

An organization’s youngest employees are actually the least likely to come up with the next big idea.

According to their results, just 5.8% of those under 30 were considered innovators. The 60-and-above crowd made up 10% of innovators. The median age overall, they found, was 47.

If an employee spends decades in the same profession, companies often assume that they are no longer passionate about their work or driven to excel. Employers may perceive millennials as being more motivated than their older counterparts who have already conquered the career ladder.

In a survey conducted by Gratton and Scott, more than 50% of respondents between the ages of 45 and 60 expressed a desire to slow down. But this desire declined the older one got. Thirty-nine percent of those over 60 wanted to work at a slower pace, while a mere 20% of employees over 70 wanted to take things slowly.

It is true that millennials are motivated to prove themselves, but this may not necessarily benefit the organization. Experts warn of over-stressed millennials who are susceptible to career burnout.

According to a study by the American Psychological Association, baby boomers and members of the Silent Generation are the least likely to suffer from stress. On a scale of 1-10 (with 10 representing “a great deal of stress”) the average millennial reported a stress level of 5.5, while boomers averaged at 4.5 and the Silent Generation reported a low 3.5 on the stress scale.

What’s worse is that these overstressed millennials aren’t taking vacations. Millennial “work martyrs” rarely use their paid time off, citing reasons like guilt, not wanting to appear replaceable, or a belief that “no one else can do my job.”

Employers should celebrate the work-life balance that more mature workers have mastered since high levels of stress may lead to unhealthy habits, high turnover rates, and a poor sense of judgement.

6. They are less productive

Younger generations may be skipping vacations and leaving the office later, but that doesn’t necessarily lead to increased output.

“On balance, older employees’ productivity and reliability is higher than that of their younger colleagues.”

When companies push older workers out to make room for younger employees, research shows that productivity across the organization actually declines. A Rand Corporation study found that for every 10 percent increase in a state’s population over 60, productivity increases by 5.5 percent.

Millennials are the most connected generation in history, and that doesn’t stop when they are in the office. According to a recent study, the average millennial wastes two hours every work day. Generation X was reported to waste an average of 1.6 hours each day, while Boomers wasted the least amount of time in the office: 41 minutes.

In a COGITO study, a group of 20- to 31-year-olds and a group of 65- to 80-year-olds were asked to perform a set of tests over a 100-day period that targeted their memory, speed, and cognitive abilities. The older group performed more consistently than their younger counterparts who experienced more fluctuations in their results.

Commenting on the research, Axel Börsch-Supan of the Max Planck Institute for Social Law and Social Policy said, “On balance, older employees’ productivity and reliability is higher than that of their younger colleagues.”

7. They are the minority

Employers are desperate to know the secrets of retaining and attracting millennial employees, but demographics indicate that their concern may be focused on the wrong generations.

According to the Bureau of Labor Statistics (BLS), workers in their 70s and beyond are the fastest-growing office demographic. By 2022, they predict that 32 percent of 65- to 74-year-olds will participate in the workforce (a 20% increase from 2002), and 11 percent of adults 75 and older will work (a 6 percent increase from 2002).

8. They are taking jobs away from younger employees

Underlying every ageist belief is the fear that older workers are taking jobs and opportunities away from younger employees.

“There’s no evidence to support that increased employment by older people is going to hurt younger people in any way.”

The Center for Retirement Research at Boston College analyzed Current Population Survey data and found that older employees remaining in the workforce had no effect on unemployment rates of younger workers.

"There's no evidence to support that increased employment by older people is going to hurt younger people in any way," said Alicia Munnell, director of the Center for Retirement Research.

Did You Experience Age Discrimination?

If you believe you were terminated for one of the stereotypes above or another reason based solely on your age, know that you are protected under the Age Discrimination in Employment Actf. To find out if you are eligible for a lawsuit against your employer, contact us for a free, no-obligation legal review.