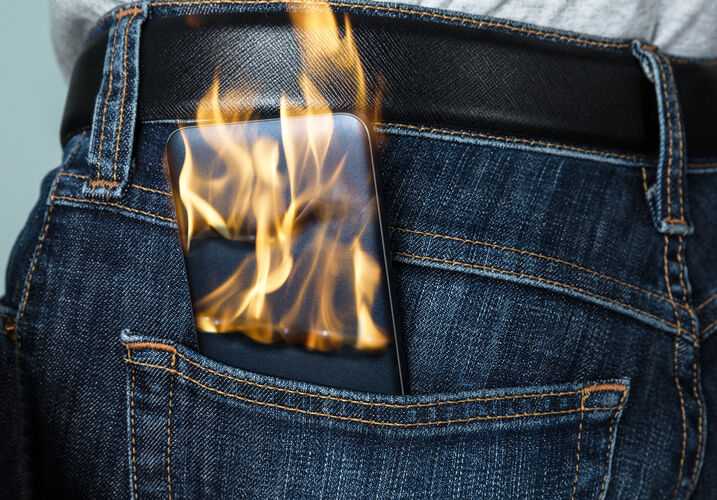 No other battery can store as much energy as a lithium-ion battery, but the extra hours of power they provide electronic devices comes with a trade off; they occasionally burst into flames.

Only a small percentage of all products with lithium-ion (li-ion) batteries combust. Several high-profile incidents in just the last few years, however, have demonstrated the potential for catastrophic injury when they do catch fire. Furthermore, when lithium batteries are improperly disposed of they can cause fires in recycling centers, landfills, and garbage and recycling trucks.

Since just about everyone comes in contact on a daily basis with a lithium battery-powered product, let’s learn more about them, the products they’ve made dangerous, and how to properly dispose of them so they don’t start a fire.

How Do Lithium-Ion Batteries Store Energy?

Lithium-ion batteries are composed of four main parts: positively-charged cathodes, negatively-charged anodes, a highly flammable liquid electrolyte, and a thin sheet of polypropylene that separates the cathodes from the anodes.

When a lithium battery is charging, electricity flows from the cathodes through the porous polypropylene separator and the liquid electrolyte to the anodes. When the device is discharging energy during use, the reverse process happens.

What Causes Li-Ion Batteries to Explode?

When the two electrodes come in contact with one another, the battery can short circuit, leading to a chemical chain reaction known as thermal runaway. During thermal runaway temperatures can climb to more than 1,000° F, which creates intense pressure that causes the flammable liquid electrolyte to combust.

...when lithium batteries are improperly disposed of they can cause fires in recycling centers, landfills, and on garbage and recycling trucks.

The thin layer of polypropylene that separates the two electrodes is supposed to prevent this from happening, but that divider has grown smaller and smaller as devices become slimmer and batteries stronger.

Still, li-ion batteries aren’t designed to spontaneously combust, and when they do, there is a reason. The most common causes of thermal runaway include:

Which Electronic Devices Are Susceptible to Overheating?

Remote controls, wireless earbuds, children’s toys, and even baby monitors have all been known to catch fire unexpectedly. Here’s an overview of the most notable lithium battery explosions and recalls.

In 2006, Dell recalled more than four million laptops because of the danger posed by overheating li-ion batteries. The issue arose again in 2017 when a camera captured video of a teen’s Dell laptop bursting into flames while charging in his living room.

When our client J. Michael Hoce, purchased an e-cigarette battery online that was manufactured in China, he didn’t expect to have his front three teeth blown out when the battery exploded.

“The battery turned the e-cigarette into a pipe bomb,” attorney Mike Morgan explained.“This is an important case reinforcing the belief that sellers are responsible if they are going to buy cheap inferior products from China and sell them here,” Morgan said. “Cases like this keep all of us safe.”

Other vape pen explosions have ripped holes near people’s mouths, blinded eyes, caused second and third-degree burns, and even set cars on fire. From 2009 to January 2016, the FDA received 134 reports of vape fires and explosions.

More than half a million hoverboards were recalled in 2016 after a string of fires and explosions. Some of these self-balancing scooters popular among children caught fire while charging, riding, and even when they weren’t being used.

The CPSC reported that they received 99 reports of hoverboards “overheating, sparking, smoking, catching fire and/or exploding.” These incidents resulted in more than $2 million in property damage.

In 2016, videos of spontaneous explosions in people’s pockets began circulating on the internet. In turned out that there was a systemic problem with some Samsung phones that made them prone to exploding. They were considered so dangerous that they were banned from airplanes.

Samsung has said that the phones weren’t manufactured with enough space between the battery’s separator and the electrodes, causing the cathodes and anodes in some phones to come in contact and short circuit. Overall, there were 92 cases of Galaxy Note fires, 26 burns, and 55 incidents of property damage.

Even when the li-ion battery powering your cell phone, laptop, or e-cigarette works properly during its useful life, it can still cause fires if you don’t dispose of it correctly. Each year, recycling centers, garbage and recycling trucks, and landfills must deal with fires caused by li-ion batteries.

Just this year, an improperly disposed lithium battery caused a five-alarm fire{: target="_blank"} at a recycling facility in Queens, New York City, according to a USA Today report. That same month, a recycling plant in Indianapolis, Indiana was also shut down by a fire caused by batteries, USA today wrote.

“The battery turned the e-cigarette into a pipe bomb,” attorney Mike Morgan explained.

Similarly, a landfill in Mesa County, Colorado had to deal with two fires caused by li-ion batteries, according to local news reports. And last year, a New York City garbage truck caught on fire when the workers compacted the waste, igniting and exploding a battery.

To avoid causing fires and putting the nation’s waste management workers in danger, lithium batteries can be recycled properly. Home Depot, Lowes, and Best Buy stores nationwide will accept spent li-ion batteries, and if you’re willing to deliver them, your local recycling center will likely be able to recycle them.

If you must put them in your recycling bin, it’s recommended that you place them in a sealed plastic bag to prevent the battery from coming in direct contact with metal. A less optimal but still viable solution is to wrap the battery in electrical or duct tape to cover the terminal, so that it can’t make contact with metal, according to the USA Today report.

In 2017, 175 million pounds of lithium-ion batteries were sold in the United States, according to USA Today’s report. Just a small percentage ever cause a fire, but when each percentage point represents a potential injury, there is no acceptable margin for error.

Contact us today for a free, no-obligation case evaluation to learn more about how we may be able to help you recover compensation.

Do I Qualify for a Claim if I Am Not a Veteran?

If you or a loved one suffered or are currently suffering from a health condition caused by exposure to the contaminated water at Marine Corps Base Camp Lejeune, you could be eligible for…