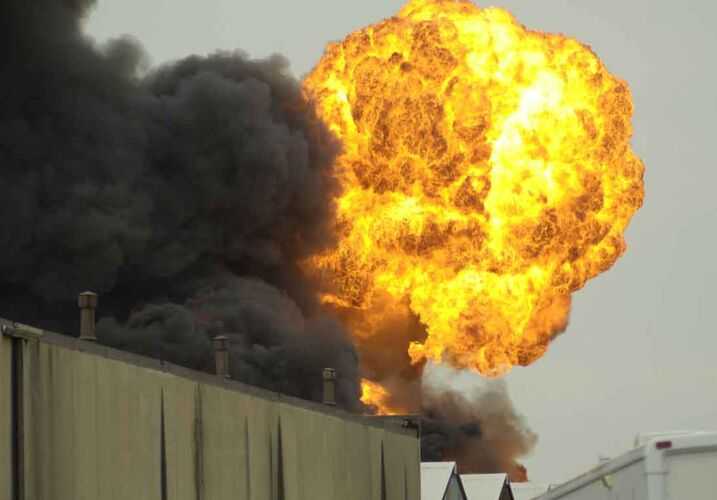 An explosion at a food processing plant heavily damaged several parts of the building and ruptured a water main in Elk Grove Village, Illinois Friday morning.

Fortunately only one person sustained a minor injury at the Grecian Delight Food facility, but the parking lot flooded and witnesses saw people running\ from the business, according to ABC7 Chicago. The explosion blew out some of the facility’s walls and siding, and nearby businesses were also affected.

Authorities believe the explosion released ammonia, at times a very dangerous chemical compound. Hazmat teams and emergency response are still on the scene, according to the Chicago Sun-Times.

Businesses use ammonia in food processing to control pH, as an antimicrobial, and more, according to the U.S. Food and Drug Administration.

It’s too early to say if Grecian Delight Food could have prevented the explosion or the subsequent ammonia leak at their facility, and how the two relate. But businesses have a job to safeguard their property and protect their employees and visitors from danger.

Keeping You Safe is a Company’s Job

Businesses owe their employees and patrons a duty of care, meaning it’s their responsibility to keep you safe when you are on their premises. Safely storing hazardous chemicals away from dangerous or highly volatile areas of a processing plant or other facility is a critical safety concern governed extensively by organizations like the U.S. Occupational Safety and Health Administration.

Companies that neglect their responsibility may be on the hook for your injuries, and have to pay for damages like lost wages, pain and suffering, and medical bills. Failing to maintain a property’s safety can lead to a workplace accident or dangerous premises. If an accident happens, it might yield a workers’ compensation claim or other personal injury lawsuit. Injuries that can result from an explosion or containment failure include:

This list isn’t exhaustive, and these or other injuries can happen to employees and patrons alike. You should feel safe when you go to work or out shopping. If you're injured at a place of business, taking steps to return to your previous quality of life is the most important thing you can do.

Right now it’s not clear how much damage the Grecian Delight Food facility sustained, but the situation is still developing.

Feature photo not of the explosion.