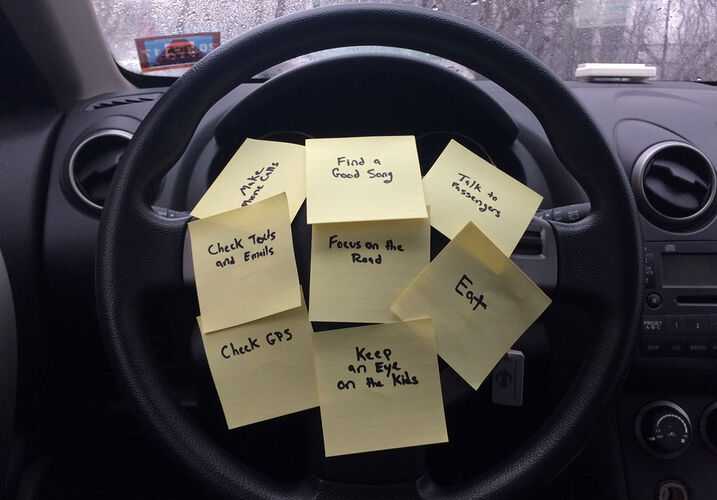 Are you a good multitasker? If the answer is "yes," would you also consider yourself a good distracted driver? When people drive distractedly they are essentially holding up a big sign that says “Look how well I multitask.” However, the sharp increase in car accidents recently suggests people are not good task jugglers, which science confirms.

The reason distracted driving is seen as a major contributor to the record rise in car accidents throughout the U.S. is largely due to the increased ownership of smartphones and the apps they provide. Yet, other distractions that have long existed — such as interacting with children in the backseat and fiddling with the radio — remain steady contributors.

There is a reason smartphones take the bulk of the blame, though. It stems from their ability to cause all three types of driver distraction — visual, manual, and cognitive — at once.

Why Are Smartphones Such a Big Distraction?

Combined, all possible driver distractions contributed to the 7.2 percent rise in car accidents between 2014 (32,744) and 2015 (35,092) — the greatest increase from year to year in the past five decades, according to the U.S. National Highway Traffic Safety Administration. And while the numbers for 2016 have yet to be released, early estimates by the National Safety Council{:target="_blank"} and NHTSA{:target="_blank"} suggest the increase from last year could be even worse.

In an effort to curb this mounting epidemic, NHTSA has placed an emphasis on raising awareness and the NSC has designated April, Distracted Driving Awareness Month. While these efforts are sure to help, the real key to stopping distracted driving could lie in making people aware of their inability to multitask.

The answer may lie in our belief that we are good multitaskers. We may think that if we can effectively scramble eggs and talk on the phone at the same time, or perfectly change a diaper while watching TV, we can also drive and talk on the phone simultaneously. The answers to a NHTSA survey on distracted driving{:target="_blank"} lends supports to this.

Drivers seemed more reluctant to make phone calls, though, with 24 percent admitting to initiating phone calls behind the wheel. Of those that admitted to speaking on the phone, half claimed it had no effect on their driving, and five percent even asserted it made them better drivers.

For texting on the other hand, only 10 percent of survey respondents admitted doing so while driving, with another 11 percent acknowledging they do so rarely but on occasion. Of those that admitted to texting, one-third claimed it had no effect on their driving.

However, scientific research is extremely skeptical of those claims.

You’ve Probably Never Multitasked a Day in Your Life

The truth for most of us is we are never multitasking, our brain is just rapidly switching focus between the multiple tasks we have at hand. Even though it seems like we can manage keeping our eyes on the road and our phone at the same time, the majority of people’s brains are actually quickly switching focus between the two tasks, which limits the how effectively we perform either one, according to a report on distracted driving published{:target="_blank"} by the NSC.

At any given moment, the human brain is going through a series of steps to take in and analyze the information in front of us. If we are attempting to do too much at one time, our brains can be overloaded without us even realizing it, the NSC report says.

The consequences of this can be severe.

Occasionally, when the brain is switching between two tasks people can develop “inattention blindness.” If our brain becomes overloaded when switching tasks it may not be able to correctly process all the information in front of us, limiting how well we do each task. When this happens in the car it could mean missing a pedestrian crossing the street, traffic lights, and even the car in front of us.

To quantify exactly how distracted people can become in the car, Dr. David Strayer, a psychology professor at the University of Utah, has been studying distracted driving for more than a decade.

In a paper{:target="_blank"} he coauthored on the topic, Dr. Strayer found that “the impairments associated with using a cell phone while driving can be as profound as those associated with driving with a blood alcohol level at 0.08 percent.” The study was not just confined to handheld devices, and its findings regarding the effects phones have on drivers applies to handsfree devices as well.

This should trouble us all.

The study suggests that not only should we be worried about drivers who text while driving with a blatant disregard for safety, but also for people who think they are doing the responsible thing and using a handsfree device.

It also suggests that we don’t take cognitive distractions as seriously as manual or visual distractions, calling into question whether it’s safe to have a conversation with a passenger or sing along to the radio, let alone be the arbitrator of an intense argument between your children in the backseat.

How Can I Stay Safe on the Road?

Ending distracted driving begins with each person pledging to do their part. It is impossible to control the actions of other drivers, but you can do your part by avoiding not just your phone, but all visual, manual, and cognitive distractions when driving.

For the remainder of April, we will be publishing articles that address some of the under-discussed aspects of distracted driving. Cell phones take up so much of the conversation surrounding distracted driving that other important aspects of the issue aren’t properly covered.

You can also visit our website if you are ever injured in an automobile accident and are in need of a car accident attorney. We work for the people, not the powerful, and our attorneys don’t charge a cent unless they win your case. Contact us for a free consultation to find out if we can help you recover the compensation you could be entitled to after a distracted driving car accident.

This post was originally written for National Distracted Driving Awareness Month. It was part of a weekly effort to explore a different aspect of distracted driving and learn more about how everyday distractions have caused a public health crisis on U.S. roads.