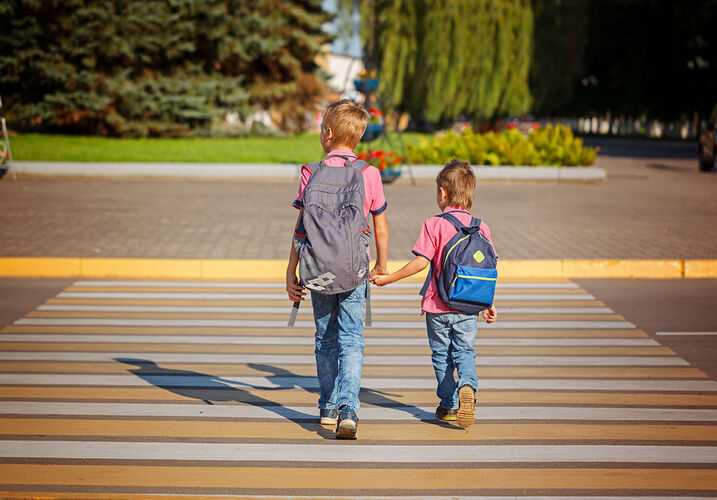 Recently a teenager on the way to school was hit by a car at the corner of Blue Ash Drive and Clays Mill Road. This accident shows the importance of safety measures at areas where kids are walking to school.

This intersection seems to be accident prone, with a previous accident occurring a week before in the same spot, according to several people on the scene.

The Blue Ash Drive and Clay Mills Road intersection and other areas can be improved with safety measures to keep kids safe while walking to and from school. Here are a few.

Well-marked crosswalks are an effective safety measure that can help save the lives of pedestrians crossing the street. Crosswalks can help to reduce accidents when motorists easily identify it as a location where pedestrians cross, according to the Federal Highway Administration. There are two basic types of crosswalk designs that are used on streets to aid pedestrians in crossing.

The crosswalk ladder design is the most common and visible type of crosswalk marking for drivers. The diagonal striping design can also enhance the visibility of a pedestrian crossing the road, according to the FHWA. These provide maximum visibility to motorists, which helps to keep child pedestrians safe.

Raised pavement markers, such as the word “STOP” painted on the roadway just before the stop bar, is another effective safety measure, according to the FHWA. If intersections allow for pedestrian crossings, such pavement markings are important to ensure pedestrians know it is safe to cross.

Speed humps can also help to slow down traffic and potentially reduce pedestrian accidents, according to the FHWA. This traffic calming measure is one of the best ways to communicate to drivers to keep their speed to a minimum.

Speed humps are designed so that drivers reduce their speed to, generally, about 15- 20 mph to prevent speed-related collisions. They are also typically used on lower-speed residential streets similar to the location where the teen was hit. Speed humps are a self-enforced safety measure, because a driver would experience discomfort such as a jolt when going over it at an excessive speed, according to the FHWA.

Another effective method of protecting pedestrians on intersections is countdown pedestrian signals. These signals are especially important at locations, when vehicle signals are not visible to pedestrians such as school zone crossings.

Pedestrian signals are universally understood by all age groups, increase the feeling of safety, and can be well-suited to senior citizens as well as children, according to the FHWA. These signals also may encourage pedestrians to use the push button rather than jaywalk which further helps to prevent accidents, the FHWA says.

High-visibility pedestrian warning signs can increase driver awareness of pedestrians, especially in areas where drivers may not expect to see pedestrians, according to the FHWA. A bright, fluorescent yellow-green color sign should be placed at locations where street crossings are not clearly stated.

Pedestrian crossing signs that are placed in the roadway also help to remind drivers of their responsibility to yield to pedestrians in the crosswalk, according to the FHWA. These bright yellow signs are placed in the middle of the road at marked crosswalks.

Until permanent safety measures are installed at the this intersection and other areas in town like it, parents and students should remain vigilant when walking to and from school to avoid a car accident.

Still, accidents happen even when you are obeying the safety measures in place. If you or someone you love has been hurt in a car accident due to another driver’s negligence, we can help. Read more to learn what our car accident attorneys in Lexington can do for you. If you are ready to pursue a claim, fill out our free, no-risk case evaluation form today.