A Continuous Flow Intersection: What Is It and Why Is Fort Myers the First To Get It? 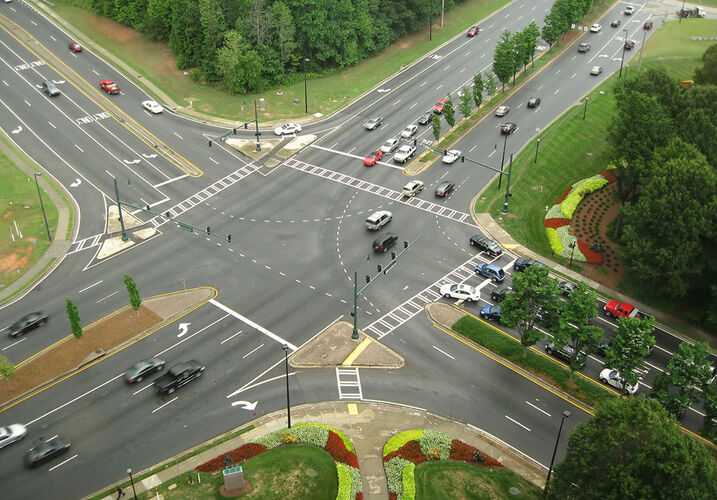 Drivers of Lee County could be seeing some major improvements along the busy, and sometimes deadly, State Road 82. The 29-mile long roadway that cuts across both Lee and Collier counties could get a bold new traffic intersection called a “continuous flow intersection,” the first in Florida, that could lead to fewer car accidents and make driving safer and more efficient.

Known as a continuous flow intersection, this traffic element could cure what the News-Press calls the “green arrow blues.” The green-arrow, left-turn intersection seems to be one of the many frustrations Lee County drivers face on S.R. 82. Drivers find themselves stuck at a red light to turn left, waiting for the light to click through all of its phases, while those looking to go straight burn more gas than necessary waiting until an opposing green arrow changes to red.

A continuous flow intersection would keep cars that wish to turn left away from motorists who are heading straight — without ramps, bridges, and fly-overs. Highway engineers believe that widening the two-lane road to six lanes through Lee County and four lanes into Collier and Hendry counties could make S.R. 82 safer.

By separating the left turn from the main intersection, Ray Lee, a consultant to the Florida Department of Transportation told News-Press, engineers “provide more green time at the main intersection for the through traffic… [giving] you a better level of service, less delay, and more capacity.”

This traffic improvement puts vehicles making a left or right-hand turn away from the main lanes and into a lane referred to as a “bay,” beginning 600 feet before the intersection, or the size of two football fields. Motorists approaching an intersection would be pushed into these bays and simply make their left turn when oncoming traffic get a green light to go straight.

By eliminating the wait for a green arrow, oncoming traffic is unaffected by those who are turning left.

Vehicles wishing to turn right also have a turning lane that is set up a distance before the intersection, but goes beyond the intersection. This is considered a modern version of a right-on-red.

“Right turns will be accommodated in right lane slip lanes that merge with the main line downstream of the intersection,” Lee informed News-Press. “There will be separate sets of signals there to guide them as they merge.

This could be the first CFI in Florida, with the state joining Louisiana, Utah, Texas, and Missouri among those who boast this traffic scheme on their roadways.

A study by the Federal Highway Administration in 2010 shows that a CFI, or sometimes called a crossover displaced left-turn, can result in shorter signal cycle lengths, shorter delays, and “higher capacities compared to conventional intersections.” This means that with high volumes of conflicting movement, a CFI is far superior and can withstand larger capacities of vehicles, cyclists, and pedestrians.

The proposed designs could be a welcomed change to a roadway known as a death trap. Some 200 accidents in the last five years have occurred on S.R. 82, claiming over two dozen lives. One such accident claimed the life of a three-year-old child, another a father and his five-year-old daughter.

One such intersection that could greatly benefit from CFI is that of S.R. 82 with Gunnery Road and Daniels Parkway in nearby Lehigh Acres. This intersection alone saw 35,500 vehicles in the month of January and is one of the most problematic areas. Some residents have fought for these changes for years.

“How many people need to die before prioritization comes to fix a road like this?” a business owner in the area told News-Press earlier this year. “One of the ladies who works for me lost a son at Sunshine and 82...It’s a deathtrap.”

But some people are now worried that it would be too different and confusing for visitors who won’t be used to the design, according to reader comments on News-Press.

A public hearing at the New Life Church in Lehigh Acres on Sept. 22. to discuss the intersection plans, but in the meantime accidents are still likely to occur down this stretch of road.

We sympathize with those who have been injured in car accidents along busy roads. Visit our car accidents page to learn more about what our attorneys can do for you.