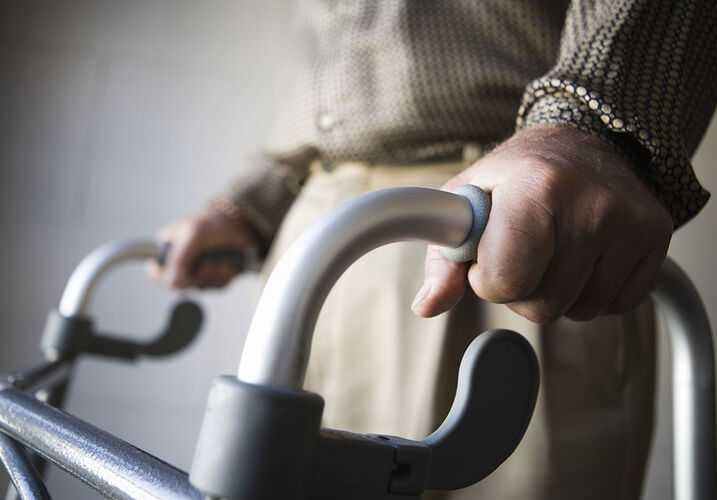 A disturbing video showing a home health aide hitting and verbally abusing a 94-year-old woman with Alzheimer’s has gone viral.

After finding unexplained bruises on his mother, Dorothy Bratten’s son started to suspect their long term caretaker of abuse, he told the Washington Post. He set up a nanny cam and his worst nightmare was confirmed.

Although always shocking, elder abuse is a common problem. In fact, the National Council on Aging estimates that approximately one in 10 seniors in the United States have experienced elder abuse.

Late last year, the government issued new regulations in an effort to protect older Americans in nursing homes. Unfortunately, elder abuse is even more difficult to record and combat when it happens at home.

A lot of cases of elder abuse go unreported because older adults fear they’ll be sent to a nursing home if they complain. Those with dementia may not be able to remember the abuse. Therefore it’s up to families and friends to look out for elder abuse perpetrated by in-home caregivers.

The Rise of Elder Abuse at Home

Almost 10 million adults aged 65 and older receive care at home or in residential care settings other than nursing homes. That number is going to grow substantially by 2030, when, according to the U.S. Census Bureau, our senior age population will have almost doubled from 40 million to 70 million.

In fact, personal care and home-health aides are the country’s second- and third-fastest growing occupations according to the U.S. Bureau of Labor Statistics. Yet, industry growth has not led to better benefits for workers.

Home health aides cook, clean, and assist seniors with their basic needs. They are integral to the well-being and survival of millions of seniors, yet they work long hours for little pay. According to NY based research and advocacy group Paraprofessional Healthcare Institute, one in four home-care workers live in households below the federal poverty line and one third lack health insurance.

Also troubling is the fact that although such a sizable portion of our population receives care from these health care workers, there are no federal regulations for home-care workers besides the general standards for care outlined by Medicaid.

Almost 10 million adults 65+ receive care at home or in residential care settings other than nursing homes.

There is also very little regulation of the home-care agencies which employ caregivers and pair them with families seeking help for elder loved ones. According to AARP, just half of all states require these agencies to conduct any sort of training for their employees and only 15 states make agencies conduct in-home reviews to check up on employees.

A 2012 study conducted by Northwestern University found more troubling details about agencies’ lack of vetting when hiring home health aides. The study looked at 180 for-profit home care agencies in the seven states with the biggest populations of older adults - Arizona, California, Colorado, Florida, Illinois, Indiana and Wisconsin. Researchers found that only 55 percent of agencies conducted a criminal background check and only 32 percent performed drug tests before hiring caregivers. Not one of the 180 agencies screened workers on their health knowledge even when they were hired to administer medication or take patients to doctors’ appointments.

Besides the new regulations for nursing homes set by the Obama administration, some government groups and nonprofits are trying to create protections for elders.

Six states are using money from the Affordable Care Act (ACA) to develop stricter standards for training and assessing home-care workers. Several organizations have created registries to pair seniors’ needs with aides who have specialized skills.

The federal Elder Justice Act was approved in 2010 as part of the ACA which would provide $500 million to “strengthen the programs and services that help prevent, detect and intervene abuse of elders and people with disabilities,” according to the National Center on Elder Abuse.

The Older Americans Act, which aims to help seniors stay as independent as possible in their homes and communities by supporting community-based services for seniors such as meals-on-wheels, was recently re-authorized for three years.

The OAA helps save Medicare and Medicaid money by helping seniors avoid hospitalization and nursing home care which is largely paid by these federal funds. It aims to decrease elder abuse by calling for improved training on elder abuse prevention and screening for workers.

Unfortunately, it took 10 years for the government to reauthorize the OAA, and Congress has yet to authorize money for the Elder Justice Act or provide funding for a comprehensive study of elder abuse. The needs of our elderly population continue to be overlooked.

Elders’ safety and wellbeing ends up being in the hands of the people closest to them, like their family and caregivers.

Types of Elder Abuse and How To Spot Them

Are you worried for your loved one’s safety? There are four types of elder abuse to watch out for: physical, sexual, emotional and financial.

Physical elder abuse entails the use of deliberate force against an elderly person that results in physical pain or injury, such as hitting, shoving. It also includes the inappropriate use of drugs, restraints, or confinement. Bruises, pressure marks, broken bones, abrasions and burns are all signs of physical abuse.

Neglect, which accounts for more than half of all reported cases of elder abuse, can also leave physical traces. Bedsores, poor hygiene and unusual weight loss are telltale signs of neglect. When a home health care worker fails to fulfill his or her obligation to take care of a patient, they put the patient at grave risk.

Sexual elder abuse is harder to detect. It involves sexual contact without the senior’s consent, but it can also entail forcing the person to watch pornographic material, sex acts, or even to undress when they don’t want to.

Neglect constitutes more than half of all reported cases of elder abuse.

Emotional or psychological abuse is also very common, and it occurs any time an elderly person is treated in a way that causes emotional pain or distress. Intimidation, yelling, threats, humiliation and ridicule are all forms of emotional abuse. Emotional elder abuse has serious psychological consequences. If you notice a strained or tense relationship between your loved one and the caregiver, or witness frequent arguments between them, it’s likely that an abusive relationship exists. Similarly, if an elderly person you know has inexplicably withdrawn from normal activities or is unusually depressed, he or she could be suffering from emotional abuse.

Seniors are also at great risk of financial exploitation, which is the unauthorized use of a person’s funds or property. Horror stories of caregivers making away with house deeds, their patients’ life savings and stealing valuables are common. Look out for missing possessions, credit cards, checks, unpaid utility bills, and any sudden changes in financial situation along with these other financial abuse warning signs.

Some general warning signs of elder abuse are changes in personality or behavior in the elder and chaperoning - when caretakers don’t allow the senior to visit with family without them. That’s a sure sign the senior is being threatened not to disclose abuse.

Calling and visiting your elderly loved ones regularly is the best way to prevent and detect elder abuse. If you have any suspicions at all, it’s best to gather evidence right away. Setting up a nanny cam like the Dorothy Bratten’s family did is a good idea.

Elder abuse is monstrous, and anyone affected deserves justice. If your loved one has suffered abuse at the hands of a caregiver, our attorneys want to hear from you.If you are ready to pursue a claim, fill out our free, no-risk case evaluation form today.

Update 9/25: Voicemails left on Florida Gov. Rick Scott's cellphone by employees of The Rehabilitation Center at Hollywood Hills asking for help were allegedly deleted, according to CBS Miami. Four…

Elder abuse in all forms - physical, emotional, sexual, and financial - is a critical problem in the United States. Much of the abuse occurs in nursing homes, which are increasingly understaffed and…