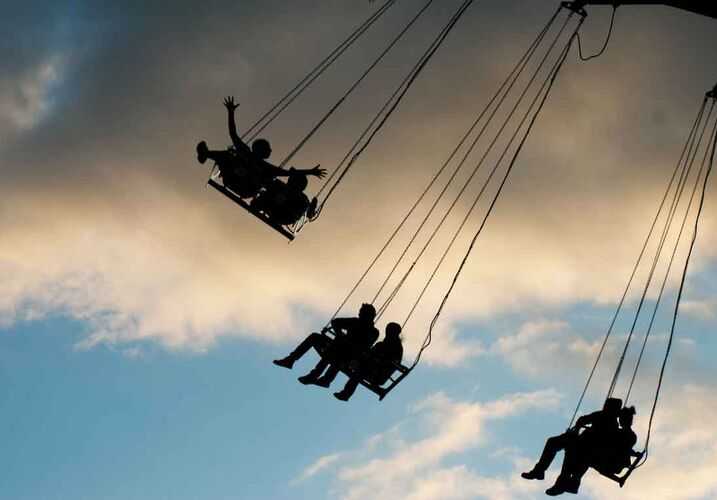 A ride malfunction at the Ohio State Fair on Wednesday killed one man and injured other patrons, marring the event’s opening day.

The Fire Ball, a spinning pendulum featuring six rows of four seats each, broke apart a little after 7 p.m., killing one and hurting seven others, according to the Columbus Dispatch.

Eyewitnesses posted graphic videos to Twitter and other online platforms showing two passengers flying as far as 50 feet before landing on the pavement.

One person has died, 7 injured after incident on ride at Ohio State Fair in Columbus. https://t.co/Dvw7QY75jS pic.twitter.com/Px8LHhYVaT

The videos provided insight into the injuries the riders suffered. “Having that video really showed us that this was a great force and a great mechanism,” according to David Evans, the medical director of the Ohio State University Wexner Medical Center. “Really consistent with a high-speed motor vehicle crash with an ejection, really something more along those lines,” he told CNN.

Authorities insist they conducted rigorous safety inspections leading up to opening day and throughout the year. The state inspects rides every year and periodically during the fair itself, according to NBC4i.

With that in mind, it’s not clear if the Ohio State Fair or the Fire Ball owner and operator could have done anything to prevent the accident. But amusement parks have a responsibility to patrons and in many cases must protect them from danger.

Demand Safety at Your Amusement Parks

Amusement park injuries fall under the blanket of premises liability, meaning owners and operators of amusement park rides must work to keep you safe.

Visitors to a property typically fall under two categories: invited and uninvited. Invitees and licensees are generally patrons invited for business or friends and family of an owner or operator. Property owners owe invitees and licensees a high standard of care, and must warn them about dangers on their premises.

Owners have a much lower duty of care for trespassers, but they’re still responsible for keeping their property relatively safe and free of hazards at all times. For an amusement park, that means things like securing entrances and exits, inspecting and maintaining rides, and cleaning up slippery surfaces.

If you suffered an injury at an amusement park or another premises, our attorneys may be able to help you recover damages like medical expenses, lost wages, and more for your injuries.

Right now, Ohio Gov. John Kasich shut down all rides at the Ohio State Fair pending additional safety inspections. "I was in total disbelief," eyewitness William Brown told NBC News in an email. "My wife just got off that ride before the accident happened. It could have been her," he said.

Feature photo not of the Ohio State Fair or the Fire Ball.