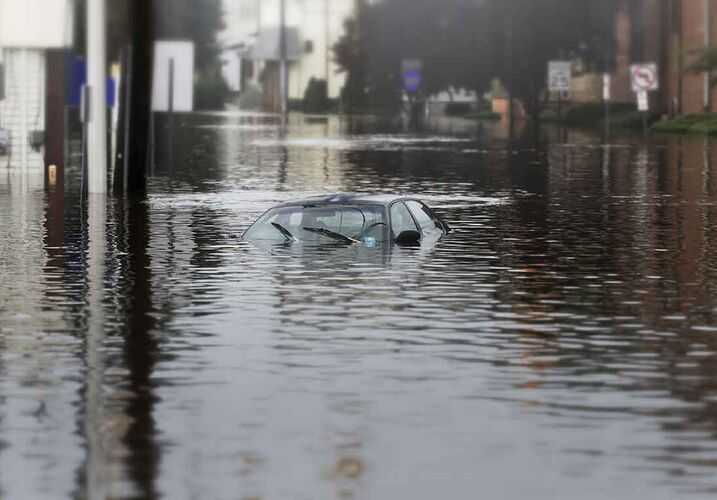 The recent storm that ravaged through Louisiana has also caused damage in areas of southern Mississippi. Crosby, a town south of Jackson, suffered horrific floods and as a result, nearly half of the town’s residents were displaced. When faced with flooding, nothing but questions arise about what to do.

Of the 350 residents in the town, about 150, including children, have lost their homes due to flood water. “It looked like Judgment Day to me,” a resident told the Clarion-Ledger. “But we made it.” While Baton Rouge and other parts of Louisiana got the worst of the rain system, officials are calling this a historic flood for this particular area of Mississippi.

While Jackson sits over an hour and a half north of Crosby, the city has been affected by major flooding in the past. One of the most notable being the 1979 Easter flood, when floodwaters caused the Pearl River to rise 15 feet above flood stage. The catastrophic event caused damage estimated at more than $1 billion in today’s dollars, as reported by WAPT, forcing over 17,000 residents of Jackson and surrounding communities from their homes.

While Jackson was not directly affected by the recent floodwaters, it’s helpful for the city’s residents to know how to approach a flood should the situation occur. The problem is that sometimes there are misconceptions about what people should actually do in the event of a flood.

Here, we debunk five big myths about flooding that Jackson residents should know.

1. If water levels aren’t too high, it’s safe to walk through floodwater. Fact: This is one of the most common misconceptions individuals have about flooding, and perhaps one of the most dangerous.

The Red Cross confirms that as little as six inches of swiftly moving water can sweep you off your feet. If you’re faced with a situation where a flowing stream water is above your ankles, it is wise to stop, turn around, and go the other way.

2. OK, I can’t walk, but SUVs, pickups, and other large vehicles are safe to drive through floodwaters. Fact: The Red Cross believes that only two feet of water can cause most vehicles to float.

Because during most floods the water is moving rapidly, there is a big chance the vehicle can be swept away as well. If you are evacuating your town or city and are driving one of the vehicles mentioned above — but come to a flooded road — turn around and go another way.

In the case of Crosby, those who lost their homes weren’t simply affected due to their proximity to creeks. It was because their homes and apartments were set lower than surrounding areas. Inadequate drainage systems could also be a cause of flooding in apparently low-risk areas.

If you are not sure whether your home is set on lower ground and receive flash flood warnings, it is probably best to prepare yourself and your family for an evacuation. It may also be wise to study your community’s Flood Insurance Rate Maps, or FIRMs, that show areas of high, moderate, and low flood risk.

4. I live in a low-risk zone so I don’t need to be prepared for a flood in advance, if at all Fact: Weather patterns can change dramatically in a short period of time, as noted by the U.S. Environmental Protection Agency. Regardless of where you live, you and your family should establish a flood plan and prepare in advance.

The Red Cross has a thorough list that points out some of the most important materials to have ready in case of an evacuation. This includes three-day water and food supplies, extra batteries, a first-aid kit, flashlights, and multi-purpose tools, among other things.

It is also important to keep documents or copies of documents that are not easily replaced, such as insurance policies and IDs.

5. Flood insurance is only available to residents located in high-risk flood zones and I live in a low-risk zone

Fact: The U.S. Federal Emergency Management Agency’s National Flood Insurance Program helps citizens around the country be better prepared financially in the case of catastrophic floods. The city of Jackson does participate in the NFIP and provides insurance to property owners and renters in the local communities. In fact, the city’s Engineering Division staff works with local homeowners, lending institutions, and insurance companies to better educate the risks of living in or a near a floodplain.

Various disputes can arise between insurance companies and policyholders. This is particularly possible if there has been property damage during a flood. Companies can often be caught acting in poor faith and refusing to honor the validity of your claim. If you’ve faced this issue, visit our insurance page to learn what Morgan & Morgan’s attorneys can do to assist you.

Tropical storm Isaias is rapidly charging up the East Coast after making landfall Monday night in Ocean Isle Beach, North Carolina. At that time, Isaias was a category 1 hurricane with maximum…

The first hurricane of the season in the Atlantic, Hurricane Hanna, made landfall along the Gulf Coast of southern Texas on Saturday before weakening to a tropical depression. CNN reports that the…