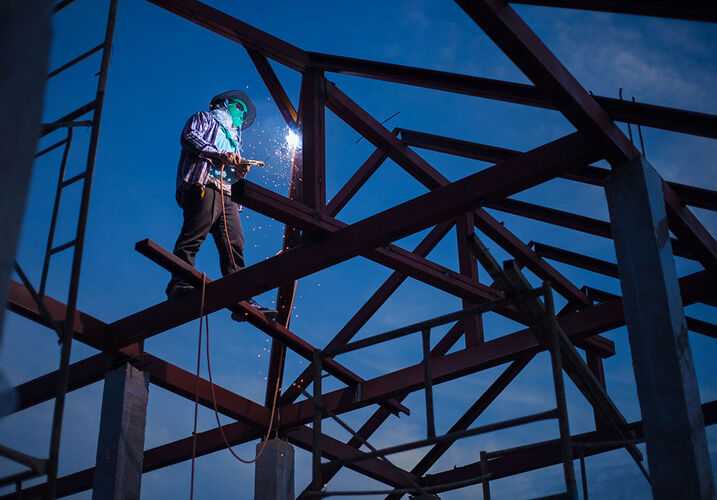 If you were a construction worker who avoided getting injured or killed on the job this year, you know how lucky you are. After all, one out of every five workplace fatalities happen on a construction site, according to the U.S. Occupational Safety and Health Administration. To ensure you remain safe in 2017, consider taking on some construction site safety tips as your New Year’s resolution.

In 2015, 4,836 workers died at work, with 937 coming in private construction, the most since 2008, according to OSHA. More than 60 percent of these deaths had just four causes: falls, electrocutions, struck-by incidents, and getting caught-in/between something, which OSHA has dubbed the “Fatal Four.”

You can do your part to eliminate the Fatal Four by making a safer workplace part of your New Year's resolutions.

Considering that construction workers can find themselves working on the second floor of a small home or tens of stories up on a skyscraper, one would think fall protection is a priority. However, falls were the leading cause of construction worker deaths, accounting for nearly 40 percent — by far the leading cause. Surprisingly, fall protection was also the most cited safety violation of 2015, according to OSHA.

To keep yourself from falling victim to such an incident, OSHA recommends you always wear and use personal fall arrest equipment when working in elevated spaces. Also, be sure the scaffolding is sturdy enough to hold you, and that a perimeter barrier is installed so you don’t tumble off the side. Finally, OSHA recommends that all floor openings be securely covered, and openings that are not covered be clearly marked.

Take the Shock Out of the Workplace

In order to use power tools, there needs to be a power source, and construction sites require a lot of both. With all those circuits and wires around, the risk of electrocution goes way up. Similarly, working in in close proximity to power lines also poses an electrocution threat.

If you are working near power lines, make sure your workstation is set up a safe distance away from them. If you need to be near them, or a are working where the power lines may be underground, be sure to use nonconductive equipment and check that the power company has de-energized the wires before you begin working, according to OSHA.

When using power tools and extension cords, only use them as designed and try avoid using them in damp and wet places. Also, check to make sure the tool is properly insulated before use. When the insulation of a power tool or extension cord is damaged, exposed metal parts could get energized if they are touched by a live wire inside, according to OSHA.

Don't Get Struck by Surprises

On a construction site there is a lot going on, and if one person is not paying attention the results can be deadly. This is likely the case when a construction worker is struck by another object at work. This can include a tool that fell from higher up on the scaffolding, getting hit by a truck, or an object in the grip of a crane that gets separated and plunges towards the earth, among other situations.

The best way you can avoid getting struck by an object at work is by being aware of everything going on around you, including the location of all heavy equipment, according to OSHA. Never work under a suspended load, even if you suspect it is secure, and wear your hard hat at all times to protect yourself from smaller objects that could fall, OSHA says.

OSHA also recommends that you wear highly visible clothing at all times. This will keep you in sight, so people won’t think the area is clear when you’re actually standing right there.

Don't Get Stuck or Caught Up on Things

On top of worrying about getting struck by an object, construction workers also have to worry about getting caught in or crushed by machinery, a truck, or getting buried alive by a collapsed trench.

If you are operating heavy machinery, make sure all the moving parts are guarded by something to ensure you don’t get caught on them, and avoid wearing jewelry and loose clothing, too, so they don’t accidentally get caught in the moving parts, according to OSHA.

You can avoid getting pinned between two objects by always being aware of where you are and the equipment around you. Specifically, OSHA recommends that construction workers never place themselves between moving materials and an immovable structure.

What If I Sustain An Injury On The Job?

Even if you follow all of those precautions, you could still get injured on the job. In such a situation, you are potentially entitled to workers' compensation benefits that replace some wages and cover medical bills. However, sometimes they make you fight just to get those benefits — even though you've put in all of that hard work for them. That's why we're here: We do the fighting for you.

At Morgan & Morgan, our construction accident attorneys have been handling claims for nearly 30 years and may be able to help you identify who you can hold accountable for your injury. Contact us today for a free, no-obligation case evaluation to find out more about how exactly our attorneys can help you.