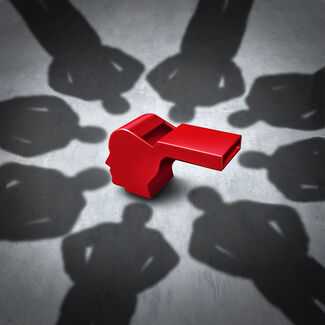 A whistleblower is a person who “blows the whistle” by reporting fraud, corruption, abuse, or another illegal or unethical activity to an authority in position to take corrective action. For example, a hospital worker with knowledge of illegal kickbacks to defraud Medicare can file a whistleblower lawsuit against the hospital on behalf of the U.S. government.

Who Can Blow the Whistle?

Generally, whistleblowers work inside of the organizations where the misconduct takes place. Their access allows them to glean information that might not be available to those on the outside. However, being an insider is not a requirement. What matters is that the wrongdoing would have otherwise gone undetected, no matter who reveals it.

Whistleblowers play an essential role in holding businesses accountable. Oftentimes these individuals are employees in private companies that are defrauding the federal government. By coming forward, they not only promote accountability, but also protect taxpayer funds.

What Is Qui Tam?

Qui tam is a provision in the False Claims Act (FCA). The FCA imposes liability on any individual or company who attempts to defraud the U.S. government. The qui tam provision allows whistleblowers to receive a portion of the damages recovered in a successful prosecution (typically 15-30% of the recovery). It also entitles them to protection against retaliation from their employer: Whistleblowers are not to be fired, demoted, threatened, harassed, or otherwise discriminated against for speaking out.

The qui tam provision was designed to encourage private citizens to share information about entities seeking to defraud the U.S. government, and enable the government to recoup stolen funds.

What Are Some Examples of Whistleblower Claims?

There are many ways in which an organization or individual might attempt to defraud the U.S. government. For example:

What Evidence Do Whistleblowers Need to Present?

Detailed evidence is essential in any qui tam lawsuit, whether or not the person bringing the claim witnessed the misconduct firsthand. Financial records, emails, memorandums, chat messages, and other documentary evidence come in handy. In the event the government becomes involved in the case, they may subpoena the company for documents.

Although the nature of the evidence required depends on the company and industry, all evidence should help demonstrate the fraudulent party’s intent to defraud the government and/or the extent or impact of the fraud.

If you have knowledge of an individual or corporation attempting to defraud the federal government, you could be rewarded for taking action. The attorneys at Morgan & Morgan are here to help. We can evaluate your claim, help you file a qui tam lawsuit, and fight for the maximum compensation for your contributions.

We offer free, confidential no-risk consultations, so schedule yours today.

Free What is the Meaning of a Whistleblower? Case Review