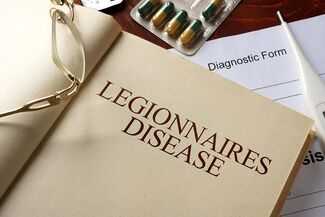 Legionnaires’ disease was identified in 1976 following an outbreak at an American Legion convention in Philadelphia that year. It’s not transferred from person to person; instead, you get it by breathing in a mist that is laden with Legionella bacteria. The mist could come from air conditioning units, cooling towers, drinking water systems, grocery store mist machines, and hot tubs — environments perfect for the bacteria to flourish. Symptoms generally start from two to 10 days after exposure. No vaccines exist for Legionnaires’ disease. If you believe you have this ailment, contact Morgan & Morgan via this form for a free case evaluation.

Legionnaires’ disease is a form of pneumonia. Symptoms include:

While anyone can contract Legionnaires’ disease, certain people are more susceptible, including:

Legionnaires’ disease is treatable with antibiotics. The healthier you are, the quicker you are likely to recover. According to the CDC, 1 in 10 people die of the infection. If you think you might have been exposed to Legionella bacteria and are showing symptoms, you should contact a doctor as soon as possible.

Sometimes, Legionnaires’ disease leads to serious and life-threatening complications like respiratory failure, septic shock and acute kidney failure. Treating the ailment promptly reduces the risk of getting very sick or even dying of these conditions.

Why You May Be Entitled to Compensation

Failure to keep systems such as a hot tub or a grocery store misting machine in good repair may allow the growth of Legionella bacteria. You may be entitled to compensation if you contract Legionnaires’ disease through one of these improperly maintained systems.

If you have been infected with Legionnaires’ disease or lost a loved one because of complications from the condition, contact Morgan & Morgan for a free case evaluation.