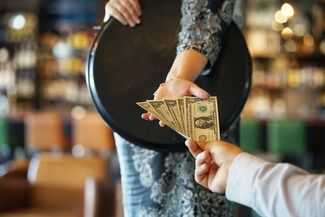 Is Tip Pooling Legal? The Definitions of Pooling, Sharing, And Tipping Out

When you work in a restaurant, tips are usually the majority of your income. Server base salaries tend to be lower (tipped minimum wage is federally mandated at $2.13 hourly) because the wage takes tips into account. In restaurants, tip sharing or pooling can ensure that staff members are fairly compensated for their participation in the customer’s overall experience.

However, tip pooling and tip sharing are not always carried out correctly, and certain practices are not only illegal but take pay away from lower-waged workers. You may be a victim of wage theft and not even know it. Not sure? Here’s our tip pooling, tip sharing, and tipping out breakdown along with examples for each.

What Is Tip Pooling?

The laws attached to tip pooling may be different now than when you were hired. Before April 2018, tip sharing was allowed to take place as long as employers paid their tipped workers the federal minimum wage. FAB 2018-3 reiterates that employers are never allowed to take employees’ tips.
This tip sharing was titled “tip pooling” in the FAB 2018-3 legislation—another reason to focus more on the practice in your workplace rather than what it’s called.
The biggest question to ask yourself is: after sharing or dividing my tips, am I making less than federal minimum wage ($7.25) hourly including take-home tips? If the answer is yes, we can help. (It's important to note that minimum wage varies in different locations; check your state or city for their minimum wage laws.)
The definition of tip pooling is when the total amount of tips earned is divided among non-supervisory staff members. For example: waitresses at a restaurant may put together all their tips after a given shift and divide the total evenly.
Tip pooling generally occurs among:
A tip pool must always be a prearranged agreement that all employees are aware of; usually it would be included in the employment contract. Some see it as unfair because coworkers who were perceived as less efficient or hardworking receive equal compensation to the more competent employees: however, tip pooling is legal and there’s no law about tip sharing that works upon merit.
Now, tip pools can also include back of house staff. However, back of house staff may have been included in other practices, like tip sharing or tipping out.

What Is Tipping Out?

Tipping out, sometimes known as tip sharing, is a bit different than tip pooling. When tipping out, servers will give a certain percentage of their tip to other staff members. For example: a waiter may make $200 in tips for the night, then give 5 percent to the dishwasher, 10 percent to the chef, and so on. Staff who could receive a portion of a server’s tip through tip sharing include:
There’s no defined industry standard of tip out percentages, but generally servers can expect to tip out around 20-30 percent of their tip if their workplace mandates the practice. While some servers may find this unfair, there’s usually nothing illegal about tipping out, and just because your workplace has a tip sharing agreement doesn’t mean that it’s operating illegally. However, tip sharing should not make tipped employees’ take-home wage dip below minimum wage.

Sometimes workers and employers will use “tip sharing,” “tipping out,” and “tip pooling” as interchangeable phrases, so the best way to determine the situation is by who the tips are going to. The only phrase used by the Department of Labor is “tip pooling” but what it’s called matters less than what’s actually happening in your workplace.

When Is Tip Sharing Or Tip Pooling Illegal?

Simply put, supervisors should not be part of tip pooling or sharing. If your manager receives a percentage of the tip out or pulls a dollar bill out of the tip jar, it’s likely they’re breaking the law.
Other illegal actions include:
At Morgan & Morgan, our attorneys have decades of experience handling wage theft claims and are offering free consultations to those who may be affected by wage theft. Do not hesitate to contact us today for a free, no-obligation case review.