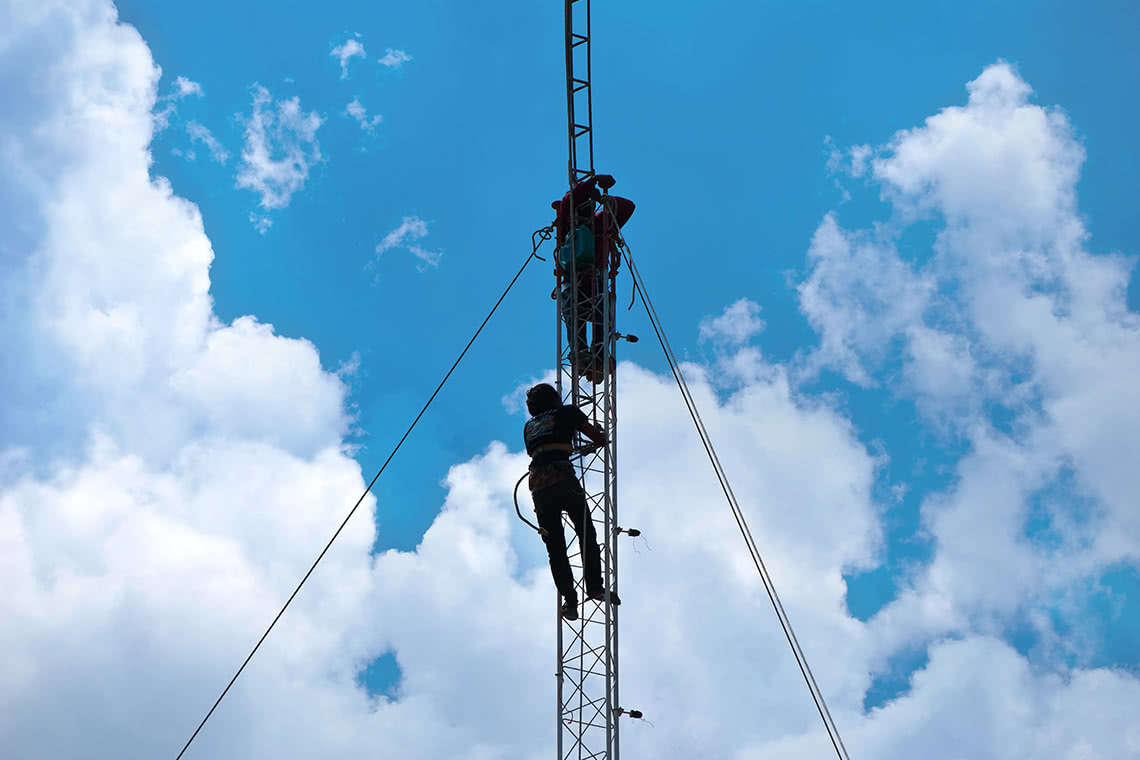 Cell tower workers have one of the toughest jobs out there. Climbing cell towers requires physical strength, dexterity, and the ability to keep your cool when scaling heights of up to 2,000 feet above the ground. States like Mississippi, Alabama, Florida, and Georgia in particular have benefited from the new job opportunities that the cellular industry has created.

As we become more reliant on our phones, tablets, and other digital devices, the demand for faster cellular service and better networks only grows. More cell tower installations and upgrades mean more jobs in the industry, but this demand can also lead to corner-cutting and dangerous conditions for workers.

As a result, cell tower related fatalities have shot up in recent years. There were 108 incidents involving communication towers between 2003 and 2013, resulting in 91 fatalities and 17 injuries, according to the latest figures from the U.S. Occupational Safety and Health Administration.

It doesn’t need to be this way. Cell carriers are required to abide by the safety measures established by OSHA in order to keep their workers safe from harm.

If you or someone you love has been injured or killed as a result of a cell tower accident, we may be able to help. Our attorneys are experienced in a variety of practice areas. Fill out our free, no-risk case evaluation form to learn what our attorneys at Morgan & Morgan can do for you.

One of the Most Dangerous Jobs in America

Although there are only approximately 10,000 tower climbing workers (who work on cell towers, along with television, the internet, radio, microwave, and other communication towers) in America, this industry’s workers have a death rate roughly 10 times that of construction workers, according to ProPublica.
Nearly 100 tower climbers were killed on the job in the past nine years. Of these cell site fatalities, 23 were attributed to major carriers and 17 involved workers from regional carriers.
This growing issue has led OSHA to keep a closer eye on the industry, especially to cell carriers who use contractors and subcontractors to do their cell tower work, to ensure safety standards are being upheld.
“It is imperative that the cell tower industry take steps immediately to address this pressing issue: no worker should risk death for a paycheck,” OSHA administrator David Michaels said in a letter to cell carriers.

Some of the common hazards associated with cell tower work listed by OSHA include, but are not limited to, the following:
Additionally, according to an investigation on cell tower fatalities  by ProPublica, many accidents can be attributed to poor training, shoddy equipment, and a push to work overnight and in dangerous conditions, all to meet the urgent demand of carriers.

A number of lawsuits have been filed as a result of the rising occurrence of cell tower accident, leading to some notable verdicts and settlements according to news reports around the country.

How an Attorney May be Able to Help You

Our attorneys at Morgan & Morgan will fight to try and prove liability on the part of the negligent party or parties and recover compensation for your medical bills, wrongful death, or other damages. We will work to gather the evidence needed to show how negligence led to you or your loved one’s injury or death, and how proper adherence to OSHA safety standards could have prevented that accident.
If you or someone you love was injured or killed as a result of a cell tower accident, don’t hesitate to contact our attorneys today.
We're here to help you with a variety of cases, including car accidents , workers' compensation , and other personal injury lawsuits . Fill out our free, no-risk case evaluation form to see if you have a case. You may be entitled to compensation.