From Reptiles to Weather and More: Driving in Tampa Can Be an Odd Experience Sometimes 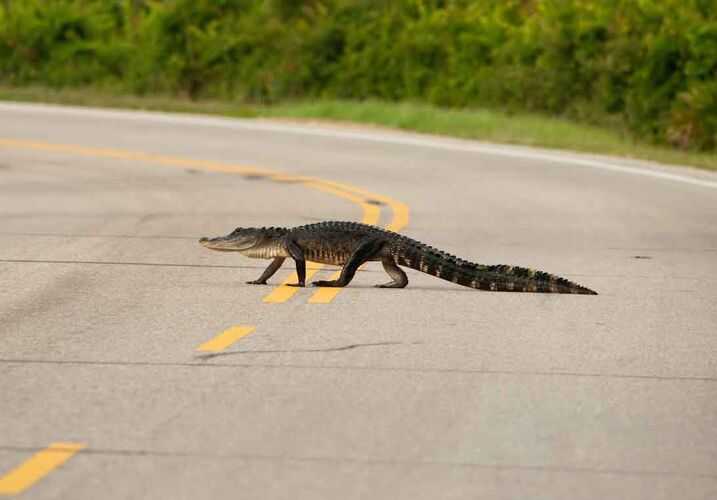 Tampa’s roads can be as wild as the news stories for which Florida is known, and a recent video of a snake popping out of a car hood combines the wild with the weird. Crazy happenings like this can’t really be planned for, but you can learn how to react to them.

Tim Mokwa was driving in Clearwater during rush hour when a six-foot snake appeared out of his car’s hood. Mokwa pulled over and shot a video. He didn’t freak out like many drivers might have, instead acting calmly and having a little fun. A snake encounter is pretty uncommon, but a lot of Tampa area’s oddities might happen to you. Here’s how you can respond to some of those dangers.

There are more than a million alligators in Florida, and some of them think they have a right to Tampa’s roads, too. A Florida man this September struck an alligator and died just outside of Naples, losing control of his car and ending up partially submerged in a canal.

An alligator crossing is a very real hazard — one you might already have encountered — and with a nearby theme park nicknamed the “Alligator Capital of the World,” staying alert to gators can keep you and your passengers safe.

Measures like glancing under your car before you get in if you live in a gator-rich area could keep you safer. A gator might be relaxing and accidentally end up hitching a ride if you don’t. If you see a gator trying to cross a road, slow down and let it have the right of way, according to I Drive Safely, a driver-education company.

If you do hit a gator, stay in your car. It might still be nearby, and pretty angry. Gators can do serious damage and move much quicker than you might think. Call the Florida Fish and Wildlife Conservation Commission or the other authorities who are likely equipped to deal with the occasion.

Another recent Clearwater headline saw an injured bald eagle holding up traffic. It was hit trying to score a meal in the street, but police and firefighters redirected flow until he made it to the side of the road and was safely moved to a rehabilitation clinic.

Florida has one of the densest nesting populations of bald eagles in the contiguous United States, per the FWC, so be on the lookout! Eagles and other birds can unexpectedly fly onto the road or in front of your car, and even if you can’t avoid them, you can control the fallout.

If a bird is in the road and difficult to see, stop and wait for it to finish crossing and try to get the attention of other drivers. If it’s already injured, contact the authorities, who could help find a place for it to recuperate. Tampa is home to all kinds of wildlife and with several high-profile recovery facilities and Lowry Park Zoo, so finding a temporary home is a kind and feasible thing to do.

Driving sometimes turns violent in Tampa, with heavy rainfall obscuring your vision or thunder distracting you from the road. But one unexpected side effect of a thunderstorm is hail. Hail near Tampa was reported this year already, and its size and formation is often hard to predict until it’s happening.

Once a hailstone is too big, it falls through the updraft and might plunk on your windshield, roof, or hood, startling you in the midst of an already-vicious storm. If you aren’t ready for it, you might veer out of your lane trying to avoid what you think is something completely different, like a truck dropping sand or pellets from its bed. Knowing what to expect can be the difference between a few dents and disaster.

If you’re driving, take shelter in a parking garage or other covered area to wait out the storm. At home, you can use blankets or other layers to protect your car from damage. You can even buy advertised hail protection system or specialized covers if you anticipate driving somewhere with a lot of hail action.

What You Can Do

Driving in Tampa can be an experience. Staying on the lookout for the unusual and attentive in general could keep you safe. In the event an accident does happen, an attorney could help you through the process, from the moment you’re in an accident to the day you file your claim. If you’re ready to move forward today, fill out a risk-free, no cost case evaluation.