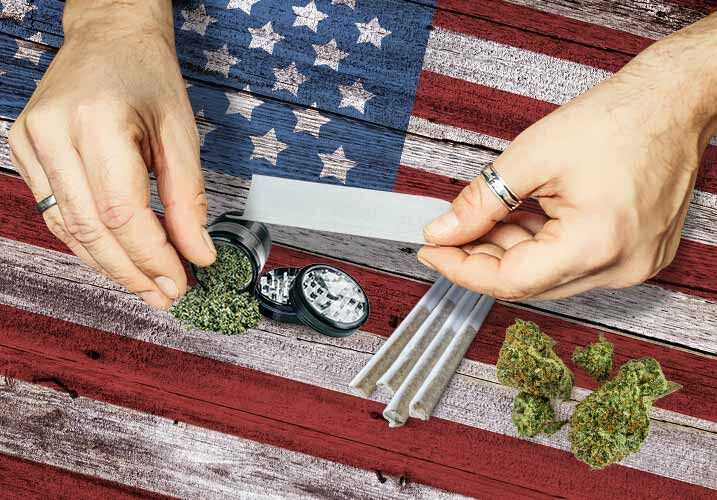 Where we’ve been, where we are, and where we’re going

Cannabis, marijuana, weed, pot—whatever you prefer to call it, you’ve likely seen its reputation change over time. Due to conflicting state and federal laws, decades of intentional misinformation, and a general lack of understanding of the drug, it can be easy to get lost between fact and fiction.

The history of marijuana laws in America is long and complicated, and it’s still unfolding every day. Rooted in xenophobia and racism, it has seen the destruction of families and communities of color, and it’s prevented sick people from receiving adequate treatment for their conditions. Although the American people have largely overcome twentieth-century propaganda, it’s important to recognize the adverse effects it has had on minority communities—and how those communities are still victimized by the war on drugs today.

Here, we’ll walk you through the timeline of marijuana laws in America from when the herb first hit our soil to the present day, and we’ll look at what the future might have in store for cannabis in the United States.

The use of marijuana goes back about as far as recorded human history, but the plant actually made its way to North America by way of Jamestown settlers in 1611. For generations, hemp was used to make necessities like ropes, clothing, and sails; it was so valuable that it was even considered legal tender in certain states. In 1762, the Virginia Assembly required farmers to grow it—and penalized those that didn’t.

In the 1830s, Irish physician William O’Shaughnessy learned of the medicinal properties of cannabis while in India and ultimately popularized its use in the Western world. Cannabis was added to the US Pharmacopeia in the 1850s, with pharmacies openly selling it and using it in a wide range of medicines. Unfortunately, cannabis’ smooth sailing would hit turbulence for the first time after the turn of the century.

Enacted in 1906, the Pure Food and Drug Act required medicines to be labeled with their ingredients, and it listed cannabis alongside alcohol, morphine, and opium under “addictive and/or dangerous” drugs. Although it was not obvious at the time, this was the beginning of the road to cannabis prohibition; it was this Act that gave the federal government control over food and drug products nationally.

In the 1910s, smokeable weed came to the US by two routes: Mexican refugees brought it through Texas after the revolution—which is why “marijuana” replaced “cannabis”—and sailors and immigrants from the Caribbean brought it to New Orleans and the jazz community.

Massachusetts was the first state to require a prescription for Indian hemp, in 1911. Between 1913 and 1933, 29 states criminalized cannabis.

With Mexican refugees immigrating to the US and Black people migrating to northern cities, the complexion of America was changing, and certain White populations took issue with the increased diversity and competition for work. This fear translated culturally: as young White people were connecting with Black culture through the Harlem jazz scene, people like Henry Anslinger were afraid of Black men seducing White teenagers:

"There are 100,000 total marijuana smokers in the U.S., and most are Negroes, Hispanics, Filipinos and entertainers. Their Satanic music, jazz and swing result from marijuana use. This marijuana causes white women to seek sexual relations with Negroes, entertainers and any others."

Anslinger, who was an associate in the Prohibition department, became the first head of the Bureau of Narcotics in 1930. He helped spread radical misinformation and propaganda about marijuana—that one puff can make you permanently insane, for example—and since so little was actually known about the drug, the public largely believed it. This created a culture of pot paranoia exemplified by 1936’s Reefer Madness, a film that lied about the effects of the drug in order to reinforce the hysteria. Anslinger consistently connected marijuana (and its fabricated dangers) to communities of color.

In 1937, a year after Reefer Madness, came the Marihuana Tax Act, which effectively banned cannabis—and was also drafted by Anslinger. Within five years, cannabis was removed from the US Pharmacopeia.

New York Mayor Fiorello LaGuardia was an opponent of the Marihuana Tax Act and, with the help of the New York Academy of Medicine, created a committee in 1939 that conducted comprehensive research and proved Anslinger’s claims to be blatantly false. The LaGuardia Report, which was issued in 1944,  also uncovered the racial disparity in the enforcement of the Marihuana Tax Act (one of countless red flags of systemic racism in the criminal justice system). Of course, Anslinger denounced the report as “unscientific” and ordered the committee to cease conducting studies without his permission.

In 1951, the Boggs Act created mandatory minimum sentences for drug offenses, with the Narcotics Control Act of 1956 following up to make them even stiffer. Although cannabis is not actually a narcotic drug, these pieces of legislation furthered the agenda to force the association between the two—and they made it easier to imprison people of color for decades at a time.

The Controlled Substances Act, enacted in 1970,  organized drugs into five schedules, listing cannabis as a Schedule I drug; this means it has a high potential for abuse and no accepted medical benefits. Despite centuries of evidence that contradict this labeling, repeated petitions of the DEA, and the existence of both state and federal medical marijuana programs, cannabis confoundingly remains a Schedule I drug today.

In 1970, President Richard Nixon attempted to validate cannabis prohibition by appointing the National Commission on Marihuana and Drug Abuse (or the Shafer Commission) with the intention of producing “evidence” to support his anti-marijuana sentiments. However, he admitted that he would not respect the results if the Commission were to recommend decriminalization. Before the report was even finished, Nixon declared war on drugs.

The following year, the Shafer Commission held a live press conference to discuss their findings; just like the LaGuardia Report, evidence showed that marijuana is not the dangerous drug it was made out to be. They recommended that cannabis be rescheduled, but that recommendation was promptly dismissed. Instead, the Bureau of Narcotics was combined with two other drug-related agencies to form the Drug Enforcement Administration (DEA).

The National Institute on Drug Abuse (NIDA), established in 1974, became the only entity that could contract cannabis cultivation for research and was the only federally legal source of cannabis in the US. Though this was essentially a lateral move, it did have at least some positive impact: the Investigational New Drug (IND) program.

Robert Randall, a glaucoma patient who was found cultivating weed, fought criminal charges using the Common Law Doctrine of Necessity. The judge ruled that he had a “medical necessity” to use marijuana, and instead of being convicted, he became the first American to receive marijuana from the government for a medical disorder—thus began NIDA’s IND Compassionate Use program.

The Bush Administration shut down the Compassionate Use program in the early 1990s because they claimed it was becoming too large and too expensive. Of the mere 40 patients that had been approved at this time, only 13 were allowed to continue receiving marijuana after the program was terminated.

In 1986, the Anti-Drug Abuse Act increased penalties for possession and distribution of marijuana yet again. Following that, an amendment to the act established a “three strikes policy” that allowed for life sentences for repeat offenders and the death penalty for kingpins.

Amidst the endless push-and-pull, 1996 saw California become the first state to legalize medical marijuana, with three other states following over the next two years. This broke the ice for more than 20 states to create medical marijuana programs between 1996 and 2012. The bad news? Federal law still rules.

In 2005, the DEA raided 11 medical marijuana dispensaries in California. No arrests were made, but an unknown amount of marijuana was seized, and businesses were interrupted—to say the least. Although this was a scary and uncertain hiccup in the relatively young medical marijuana industry, tensions have smoothed over: in 2009, the US Attorney General said that the DEA wouldn’t raid legal medical marijuana facilities and that the Department of Justice won’t prioritize the prosecution of legal patients.

In 2012, Colorado and Washington made history by becoming the first states to legalize marijuana for recreational use, both doing so via referendums. This marked the first time that Americans could purchase cannabis from state-legal dispensaries, and represented a turning point in public perception.

Introduced in 2014, the Rohrabacher-Farr Amendment prevented the Department of Justice from interfering with state medical marijuana laws. The same year, the federal government issued guidelines for banks to provide financial services to legal marijuana vendors, which had been a major business hurdle.

In 2018, Epidiolex became the first marijuana-based drug to be approved by the Food and Drug Administration, and the Farm Bill federally legalized hemp.

In 2020, the United Nations reclassified cannabis officially recognizing the medicinal and therapeutic benefits of the drug.

On April 1, 2022, the US House passed legislation that would legalize marijuana nationwide as well as remove criminal penalties for anyone who manufactures, distributes or possesses it. In order to be enacted this bill will still need to pass the US Senate.

The next challenge in the fight for legalization is whether the federal government will continue to list marijuana as a Schedule I drug. Federally rescheduling—or descheduling—marijuana has its benefits: it gives us the opportunity to learn more about the drug, its benefits, its drawbacks, and its applications. Improvements in clinical research may help to regulate the quality and potency of medical marijuana in order to tailor to patients’ specific individual needs. Legalization may also lead to the expungement of marijuana offenses from criminal records and aid in achieving a more socially just society. As far as we’ve come, there is still much progress to be made, and we are proud John Morgan is at the forefront of that fight.

Want to learn more about marijuana in the United States? Check out the rest of our 420 series:

Does Daylight Saving Time Save Lives?

Americans have debated the clocks springing forward, falling back, or staying still since the adoption of Daylight Saving Time (DST) in 1918. A poll by Economist/YouGov shows that nearly two-thirds…

Those who find themselves injured at the hands of a large organization have an uphill battle ahead of them, one that may take years to resolve without the proper assistance. These individuals need an…