On March 23, noted film director and activist Spike Lee sent retweeted an address that he thought was George Zimmerman’s – the man who has found himself embroiled in controversy surrounding the death of Sanford, Florida teenager Trayvon Martin. The address he actually retweeted was that of David and Elaine McClain, a couple in their seventies with no connection whatsoever to the man who shot Martin.

The McClains, as a result of the tweets (which are in violation of Twitter’s Terms of Service), were forced to temporarily relocate to a hotel due to death threats and other harassment. They retained Morgan & Morgan’s services for legal counsel and protection.

Earlier today, Mr. Lee reached out to the McClains with a “heartfelt apology,” according to Morgan & Morgan attorney Matt Morgan, and resolved the claim. They were compensated for their losses and the disruption to their lives for an undisclosed sum. It was the couple’s wish that the claim be settled quickly and amicably, to aid in the healing process for their Florida community, and to prove that the current tensions in this country can be resolved on higher ground.

The tweet originated from the account of a Los Angeles resident named Marcus Davonne Higgins, who encouraged his Twitter followers to “FEEL FREE TO REACH OUT & TOUCH HIM [Zimmerman].” He also held up a sign with the address and phone number at a protest rally. Mr. Higgins has released an apology as well. 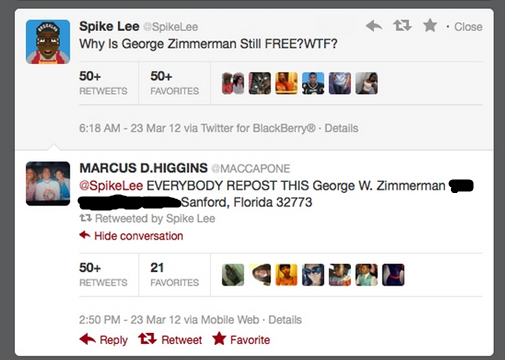