April is National Distracted Driving Awareness Month and in recognition of its importance, we at Morgan & Morgan want to do our part. Join us each week this month as we explore a different aspect of distracted driving and learn more about how everyday distractions have caused a public health crisis on U.S. roads.

The recent increase in car accidents in the U.S. has placed a spotlight on the issue at the heart of the surge — distracted driving. Too often this light shines brightest on teens and smartphones but this diverts attention from the many other distractions drivers have to deal with — like a parent tending to their child in the backseat.

Parents don’t willingly put their children in harm’s way, and for this reason, it is improbable that they would read or write a text message while driving. At the same time, though, a parent may be more than willing to tend to their child’s needs in the backseat despite it diverting their attention from the road.

However, unlike a text message or push notification, a child’s needs cannot always be ignored. Compounded with a parent’s natural urge to care for their child, it’s easy to understand how parents are willing to focus their eyes and attention on the back seat instead of the road.

One Arizona mother told Parents Magazine that she regularly finds herself “driving with my knees while I hand out breakfast and drinks like a flight attendant. I referee arguments. Once, I even reached back to deflect a carsick kid’s vomit out a window with a sun visor.”

Despite her ability to handle all these duties thus far, the mother questioned if her distracted driving was safe. “The worst part is that I had a cousin who died in a car crash (she was trying to get something off the floor for her child),” the mother said, “and it still hasn’t stopped me from making these bad choices.”

This mother is not alone. Many other parents don’t consider taking their eyes off the road to address their children’s demands as dangerous a distraction as using smartphones. However, there is research to suggest that assumption is incorrect.

Parents, Your Children Can Be a Dangerous Distraction

While it’s easy to see how cell phones and the navigation screens built into many new vehicles have contributed to making the roads more dangerous, it is hard to see your own child as hazardous. Still, a moving car is not the place to cater to every one of your child’s needs.

Too many parents fail to think this way, however. Nearly 36 percent of respondents to a survey on distracted driving released by NHTSA in 2013 admitted they interact with their children in the back seat on at least some trips, and another 13 percent admitted to doing so rarely, but on occasion. A little more than half of the respondents, 51.2 percent, claimed they never interact with children in the back seat while they are driving.

Based on these survey responses, it can be argued that many drivers are good about avoiding obvious distractions like their phones or a book, but are not as cognizant about less apparent distractions, like children in the back seat. This is a grave miscalculation on the part of parents, though. 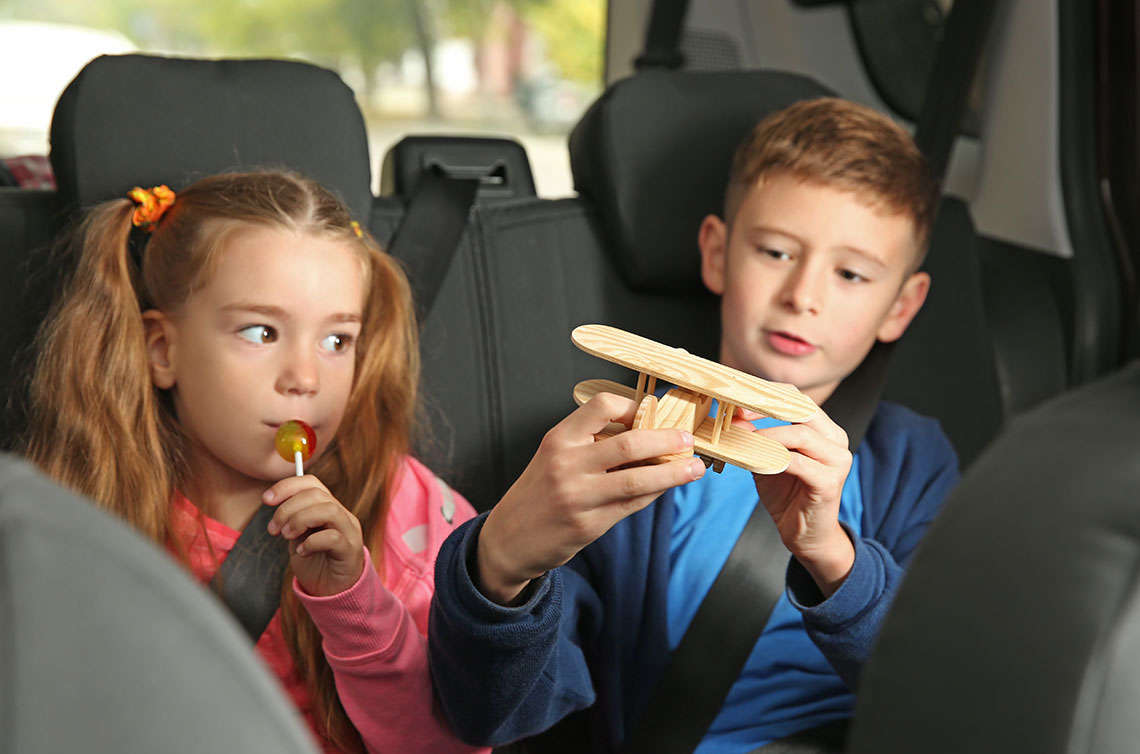 Study: Children More Distracting in the Car Than Cell Phones

A research study organized by an Australian university found children were 12 times as distracting in the car as cell phones. The study, conducted by researchers at the Monash University Accident Research Centre, found the parents in the study took their eyes off the road on average for three minutes and 22 seconds during a 16-minute trip in order to address the demands of their children.

Regardless of the reason, it is never a good idea to look away from the road while driving. Yet, sometimes a child’s demands cannot be ignored, even in the car. The question for parents is: how can they safely and effectively address their children’s needs in the car?

How to Drive With Children in the Back Seat

Children often can’t tend to their needs on their own. This is where parents come in. However, a moving vehicle complicates this relationship. Parents obviously want to attend to their children, but not by endangering them.

To help solve this conundrum, let’s review Consumer Reports’ recommendations for how parents can balance both driving and their children’s needs:

1. Think ahead: More dangerous than glancing towards the back seat or the rear-view mirror is having to rummage around for a snack or toy when your eyes should be on the road. You can avoid this situation by having everything your child or children may need easily accessible and within arms reach. This will help you tend to them quickly, efficiently, and safely.

2. Put their needs on hold: Even though preparation can go a long way towards keeping your eyes on the road while ministering to your children, you can’t prepare for everything. In those instances, it is recommended you wait until you reach your destination to safely address their needs. This might be difficult for you, and may cause a few tantrums, but it is a much safer alternative to distracted driving.

3. Pull over: Pulling over to address each and every one one of your child’s desires could make your commute unnecessarily long. Depending on the road, it may also not be safe to continuously pull over and re-merge with traffic. As a result, parents are recommended to pull over only when it’s absolutely necessary and only where the car is in a safe spot, such as at a rest stop or parking lot.

4. Educate kids on car safety: How to cross the street, not to talk to strangers, and stop, drop, and roll are all safety techniques that children often learn at a young age. Car safety should be included on this list. Explain to your child that when they are in the car it is important that they behave so adults are able to pay attention to the road. Otherwise, there could be an accident in which people get hurt.

5. Keep your eyes on the road: Children often copy what they see their parents doing, including driving habits. If you use your cell phone or fall victim to other distractions in the car, your child will see this and may emulate those behaviors when they become drivers. By avoiding distractions in the car you are not only keeping yourself and your children safe, you’re teaching them proper driving etiquette for the future.

What If I’m in a Distracted Driving Accident?

America is a big country and not every driver you share the road with will be as responsible as you are. Even if you avoid distractions yourself, you can’t account for the behavior of all the other drivers on the road.

If you or a loved one are injured in a car accident, we may be able to help. There is no up-front cost to hire a Morgan & Morgan attorney, and you will never pay a cent unless there is a favorable outcome to your case. Contact us today to learn more about how we may be able to help by filling out a free, no-obligation case review form.