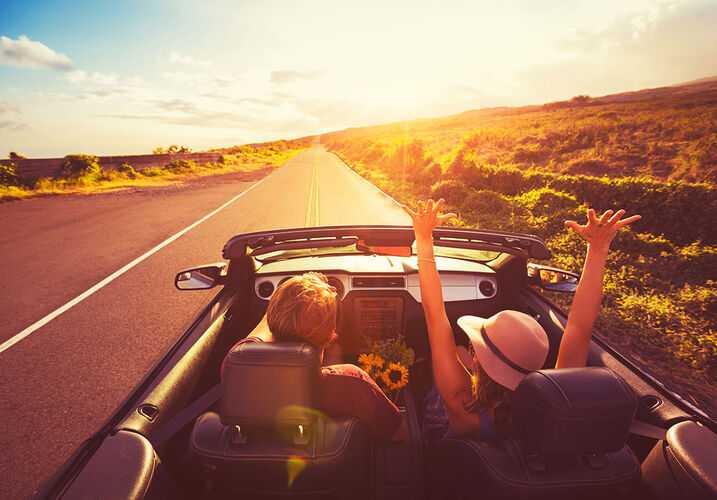 April is National Distracted Driving Awareness Month and in recognition of its importance, we at Morgan & Morgan want to do our part. Join us each week this month as we explore a different aspect of distracted driving and learn more about how everyday distractions have caused a public health crisis on U.S. roads.

Distracted driving is a constant danger on the road, but even more so when you’re in unfamiliar territory. Think about it — distractions regularly cause deadly accidents when people drive on roads they know like the back of their hand. Now imagine what those same distractions could do when driving on domestic vacation in a place you’ve never visited.

While traveling in the U.S. is generally safer than travel in most other countries, the most common cause of death among tourists worldwide is car accidents, claiming roughly 1.3 million lives annually{: target="_blank"} according to the U.S. Centers for Disease Control and Prevention.

Still, the U.S. is no safe driving Mecca. In 2015 — the most recent year which statistics are available for — there was the steepest increase in car accidents from one year to the next in the past 50 years. And early estimates by the National Safety Council predict{: target="_blank"} that 2016 was an even deadlier year than 2015.

Those planning their summer vacation should familiarize themselves with the local traffic laws and driving culture before heading out in order to avoid the uncertainty and the increased potential for distractions that comes with driving in a new place.

The cause for this recent surge in roadway fatalities is multifactored, but the most prominent and preventable reason is distracted driving. While distractions are a daily threat behind the wheel, they can be especially devastating when on unfamiliar roads.

Even though it is never advisable to look at your phone while driving, it’s unlikely to make you blow through the stop sign that halts you at the end of your block. Yet, when driving on vacation, that familiarity no longer exists, and distracted driving becomes even more dangerous.

For example, you don’t use the GPS app on your phone for turn by turn directions during your daily commute. But in a place you’ve never traveled to before, the GPS app of your choice is likely the simplest and most reliable way to get around.

However, even using a GPS app is not seamless, and the extra second or two it takes to determine exactly where the turn is could be the difference between seeing a slightly obscured stop sign on a road you’ve never driven on before and blowing through it.

In light of this, let’s review some of the driving quirks you may not be used to when driving in an unfamiliar part of the country to help you and your family drive safely this vacation season.

Driving in America Varies From Place to Place

The U.S. is a vast country with many natural beauties and great cities to visit. Traveling abroad might sound more glamorous, but you don’t have to travel outside the U.S. to go on a tropical vacation, get in touch with nature on a rural getaway, or hit the slopes on a ski trip, not to mention the unique cultural experiences that can be had from city to city and state to state.

These appealing reasons to travel the country come with a drawback when it comes to driving, though. While laws that govern driving are largely the same around the country, they are not uniform. And combined with the regional differences that affect everything from how we speak to how we drive, these laws have made driving in the U.S. a vastly different experience depending on where you are.

For instance, taking a trip to New York City will give any first-time driver there a new appreciation for the phrase “aggressive driving.” On the roads in NYC, it’s every man or woman for them self, and courtesy among drivers is in short supply. In the narrow streets lined with cars parked bumper to bumper, space is at a premium and no one lets another driver in into their lane without a battle.

Drivers unused to these dog-eat-dog conditions can be easily flustered, which can make any potential distractions all the more consuming. It’s not hard to see how an accident can happen looking at the GPS trying to figure out where to turn while impatient cabbies honk at you from behind. However, city drivers visiting more rural areas are not looking at an easy time either.

Those more aggressive driving tactics might not mesh with the local driving culture, where people share the road instead of fighting for every inch. In fact, these overly aggressive tactics could lead to an accident, especially for pedestrians who expect cars to stop for them when they have the right of way and not challenge their right to cross.

Similarly, city drivers used to the constant hustle and bustle of the city may be thrown by the stillness of driving through a place like the Georgia countryside, for example. Normally inundated with the sights and sounds of the city, these drivers might feel at ease reaching for their phone now that they have a flat, uncongested highway in front of them.

That would be a mistake.

Distracted driving is never acceptable, and in unfamiliar places, drivers need to take extra care not to do so. While fiddling with the radio or checking texts on your phone while driving is risky behavior, distractions grow even more dangerous in unfamiliar territory.

So, it’s important to vacation responsibly, and this should include research into local traffic laws and driving culture, as well as a pledge to not drive distractedly so you can enjoy your domestic vacation in whichever part of the U.S. you decide to visit.

What If I’m in a Distracted Driving Accident on Vacation?

Whether the crash happens while on vacation or down the road from your home, we are able to help car accident victims around the country. Morgan & Morgan is one of the nation's largest personal injury law firms, with offices in more than 35 cities around the country. For more than three decades, we have helped car accident victims recover compensation for their injuries, and may be able to help you too.

There is no up-front cost to hire a Morgan & Morgan attorney, and you’ll never pay a cent unless your attorney is able to obtain a favorable outcome from your case. To learn more about how we may be able to help you today fill out a free case evaluation.