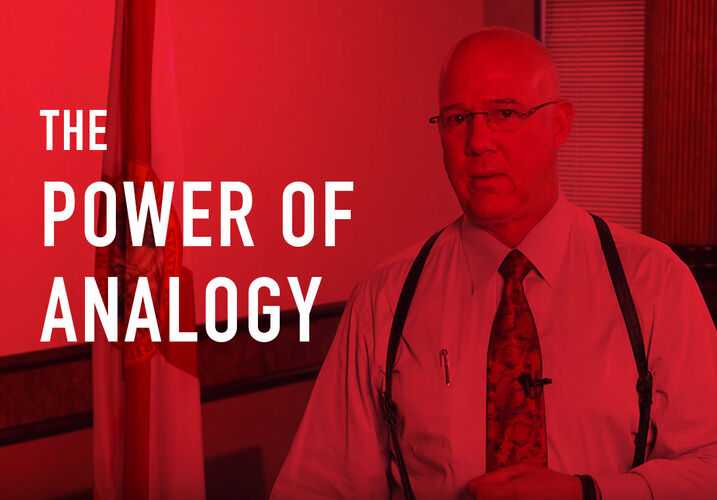 Keith Mitnik, our Senior Trial Counsel, just released a brand new DVD about how stories and analogies can help trial attorneys win cases. In The Power of Analogy, Mitnik shares the secrets of courtroom persuasion that have made him an innovator in the courtroom and one of the most successful trial attorneys in America.

In his role at Morgan & Morgan, one of the largest personal injury firms in the country, Mitnik handles all kinds of plaintiffs’ cases, including personal injury, medical malpractice, product liability, mass torts, among other areas of law. As a result, he is involved with trying multiple cases each month, and from them has developed and perfected new strategies for the courtroom.

This has proven beneficial for our clients.

Mitnik has been involved in many of the firm's largest victories, and teaches his winning methods to the firm’s younger attorneys when he isn’t preparing for trial. In just the last decade he has won verdicts that totaled more than $100 million.

One of his finest achievements is the $90 million verdict he obtained from R.J. Reynolds Tobacco Co. in 2010, on the behalf of the widow of a long time-smoker. It was the seventh largest verdict in the entire country that year.

The Power of Experience

This vast amount of trial experience gives Mitnik a unique perspective on the best ways for plaintiffs trial attorneys to make their arguments in the courtroom. More than that, he has seen the tactics of the finest defense attorneys in the nation and has developed methods for countering their strategies. In The Power of Analogy, Mitnik offers other plaintiffs’ trial attorneys the opportunity to learn these methods.

In his presentation on The Power of Analogy DVD, Mitnik builds upon the proven tactics he’s used to win trials for decades, as outlined in his book Don’t Eat the Bruises. There, Mitnik explained the importance of the beginning of a case. The book expounds upon the best methods to win your case by the end of opening statements that he originally introduced in his first publication. The two-CD lecture entitled Winning at the Beginning focused on jury selection, and offers advice similar to what one would expect from Dr. Jason Bull of the hit CBS show Bull.

In The Power of Analogy, Mitnik elaborates further on all these earlier ideas, and shares new ones that will help trial attorneys present the most effective argument. He emphasizes the importance of using analogies and stories to better explain legal concepts, bolstering an argument by furthering its effectiveness.

He also emphasizes the importance of making an honest and objective argument. Playing on the bias of juries, and taking things out of context are just some of the dishonest tricks trial attorneys will use to get a favorable verdict. However, Mitnik believes a well-structured argument, employing the facts, is always the best way to approach each case. He has even developed counter measures for the deception other trial attorneys are willing to use.

Trial attorneys will be able to learn all this and more from the The Power of Analogy, and Mitnik’s other work. By sharing what has made him so successful, Mitnik is giving other plaintiffs’ trial attorneys the tools to better represent their clients, a move that truly is for the people.