Feeding a Fire: The Great American Tradition of Grilling 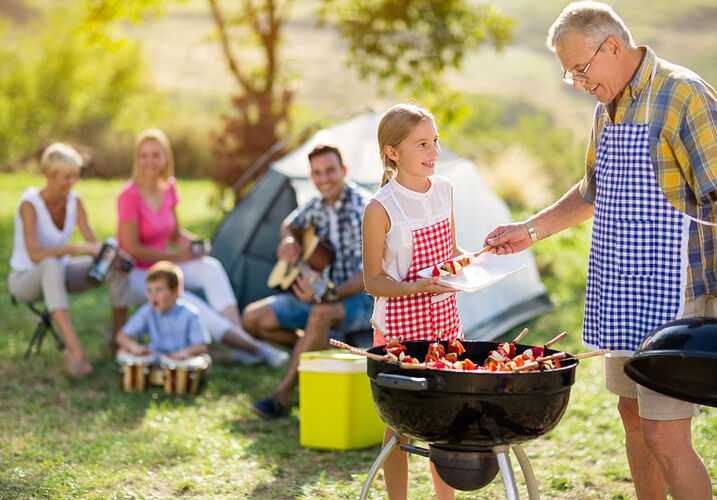 For over one million years, mankind has held a strong fascination with flames, sometimes with painful consequences. But some good things have come from playing with fire, including one of the most popular styles of cooking in the world.

Grilling has a long and colorful history in our country. It took centuries of experimentation and innovation to find the perfect way to grill up juicy cuts of meat without burning the food — or the cook and surrounding property — in the process.

Memorial Day weekend is almost here, and that means families will be lighting their grills in parks and backyards all over the country. In recognition of this beloved American weekend, today we dive into the long history of grilling in our country, and how you can stay safe at your upcoming grill-out.

Unsurprisingly, it all started with colonization. When Spanish conquerors came to the Caribbean, they observed the native people of Hispaniola, the Arawak tribe, cooking meat over fire on a frame of sticks, according to Popular Mechanics. This style of slow-cooking was dubbed barbacòa by the Spanish conquerors, who took this method back home.

This cooking style was eventually brought north by the Spanish during expeditions to the Americas, according to the Smithsonian Museum. And by the 19th century, BBQ had a stronghold in the American South.

This traditional style of southern cooking used pork, wood chips, and a vinegar-based barbecue sauce to create that signature sweet and smoky flavor, according to Southern Living magazine.

There’s little wonder that people will drive miles to taste this iconic cuisine, as well as the other styles that have evolved from it, such as South Carolina’s famous mustard-based barbecue and Kansas City’s classic tomato sauce-slathered spare ribs.

Most important, the meat is cooked slowly over low, indirect heat, sometimes as long as 18 hours. This is very different from the “slap meat on the grill” style of backyard grilling that would become popular in the mid-20th century.

Sparking a New Era of Grilling

The growing desire for a suburban, middle-class lifestyle and the development of Tiki culture following WWII led to many new inventions, including the open brazier grill. This grill was a fixture in many backyards, allowing families to enjoy a grill-out in the comfort of their own home, according to the National Museum of American History.

However, this new accessible method of grilling was not without its setbacks. Because of the open design, the meat would often be burnt to a crisp on the outside, without being cooked properly inside.

Worse yet, if used in a breeze, these open brazier grills would kick up clouds of ash and dangerous red-hot embers, according to Popular Mechanics, making for a less-than-ideal grill-out experience. Fortunately, our modern grills have a vastly improved designed, but these grill embers can and still do cause many residential fires a year.

Grill fires on residential properties result in approximately 10 deaths, 100 injuries, and $37 million in property loss each year, according to the latest data by the U.S. Federal Emergency Management Agency. And 28 percent of these fires are caused by a spark or ember from a grill landing on something flammable, such as dry grass or a deck.

In an effort to improve upon the open brazier grill — and reduce the likelihood of embers flying all over the backyard any time a breeze blows by — a welder named George Stephen who worked at Weber Brothers Metal Works tried something revolutionary in 1952.

Using metal buoys with holes punched in the lid for oxygen flow, Stephen created the prototype for the modern Weber Grill, according to the Smithsonian Museum. The rounded shape of the grill and lid allowed for better heat control, ensuring meat could cook thoroughly without burning to a crisp. The new design also helped prevent fires and burns by holding in smoldering embers and coals. This round-body grill is still used to this day.

Backyard cookouts are meant to be enjoyed at a leisurely pace, but sometimes people want to cook quickly without tending to the slow-growing fires of traditional charcoal grills. That’s where the propane grill comes in.

In an effort to find a new market for natural gas, the Arkansas Louisiana Gas Company created a grill that ran on bottled propane, according to Popular Mechanic. These new grills could be heated up quickly and hold a stable temperature, making the art of grilling easier and more convenient.

While many will argue that the taste of meat cooked over propane grills simply does not compare to traditional charcoal cooking, the ability to get a grill going in just minutes is enough to entice even the most seasoned pitmasters. That’s why propane grills are the most popular type of grill in our country to this day.

Of course, propane grills carry their own risk of fire. Over 7,000 gas grill fires occur every year, according to the U.S. National Fire Prevention Association, many of which are a result of leaking propane or improper use.

For your safety, be sure to always keep the lid open after you turn on your propane gas, and don’t wait for gas to build up before lighting your grill. This can create a dangerous explosion due to the buildup of gas.

Don’t Get Burned this Memorial Day

No one expects the worst during a fun summer grill-out, but accidents do happen.

Over half of grill fires on residential properties occur in the four-month span between May and August, so whether you’re a grilling newbie or a pitmaster, make sure to brush up on your grill safety tips before Memorial Day weekend rolls around.

If you have a fire on your property], whether it was caused by a grill, appliance, or faulty wiring, our attorneys may be able to help. Fill out our free, no-risk case evaluation form to learn more today.