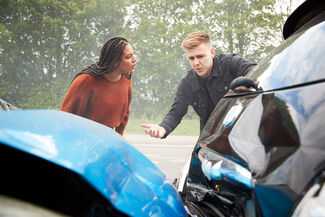 Car Accidents: What if the Other Driver Is Uninsured?

You never expect to wind up in an accident when you get behind the wheel, but unfortunately, it happens. When it does, it’s natural to think that the other driver’s insurance provider will reimburse you for medical bills, property damage, and other losses. But what if they’re uninsured?

How Many People Drive Without Insurance?

Although most states require vehicle owners to carry liability insurance, many drivers circumvent the law. In fact, approximately 1 in 8 drivers in the United States are uninsured, according to data from the Insurance Research Council. Some drivers buy insurance to get their vehicle registered, only to cancel their policy, while others simply can’t afford to pay.

You may be wondering, what happens if you’re involved in a collision with a driver who doesn’t have insurance? The answer depends on where you live.

What if I Live in a Traditional Fault-Based State?

In states that follow a traditional fault-based system, the insurer for the negligent driver is responsible for paying damages to the victim. The problem is, when the at-fault driver is uninsured, there’s no such policy to file a claim against.

To protect against this scenario, your insurance company may offer uninsured motorist coverage. You’ll pay an additional premium cost but ensure that your medical bills and car damage — which you would otherwise claim against the negligent driver — will be paid by your insurer up to a certain threshold.

You can also elect to file a lawsuit against the uninsured driver, but there’s no guarantee you’ll be able to collect anything. Many people who are uninsured have very little in the way of money and assets.

What if I Live in a No-Fault State?

In states with no-fault laws, your insurance company pays for your injuries and damages whether you were at fault or not. The good news is, you’re covered no matter what. However, no-fault laws restrict your ability to file a lawsuit unless your case meets minimum standards regarding the severity of your injury and total medical expenses you incur.

Can I Sue for Noneconomic Damages?

You may also elect to pursue a claim against the at-fault driver for noneconomic damages such as pain and suffering, and emotional distress.

What Should I Do Following an Accident?

If you are in a collision with an uninsured motorist, be sure to take the following steps:

At Morgan & Morgan, we fight on behalf of the victims of auto accidents to help them secure compensation for their medical bills, lost wages, property damage, and more. If you were hit by an uninsured driver, contact one of our highly skilled lawyers. Schedule a free case evaluation to get started.