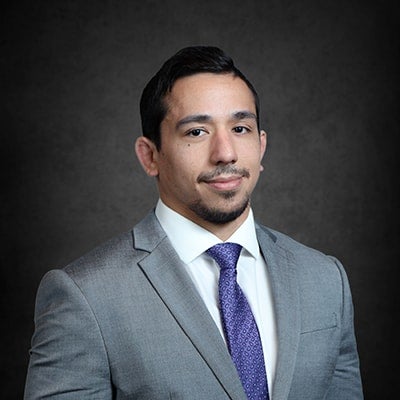 Since 2015, Sergio has recovered over 9 million dollars for injured Georgia worker. Sergio has won cases at both the trial and appellate levels including having a 2019 undefeated court appearance record of 4-0. Sergio is also a court-certified mediator under the Georgia Office of Dispute Resolution.

Sergio was a member of the Georgia Association of Latino Elected Officials’ 2016 Institute for Leadership. During law school, Sergio had a wide range of experiences including working for Fortune 100 companies such as The Coca Cola Company & First American Corporation, working for U.S. government organizations such as the Securities Exchange Commission & the Public Defender’s office, and working for international organizations such as Melo Pimenetel – a midsize law firm in Recife, Brazil – & the Colombian Consulate in Orlando.

Sergio was an All-American on the NCWA wrestling team for the University of Georgia and is a Black Belt in JiuJitsu. During his free time, he enjoys training and competing in JiuJitsu around the world.