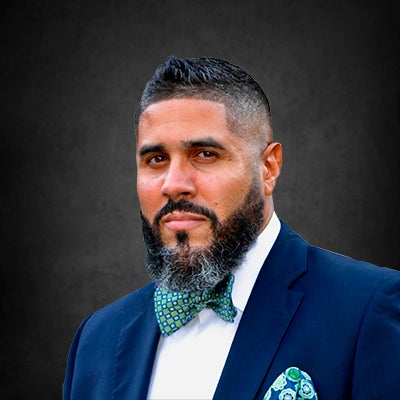 Advocacy is more than just aligning yourself with a cause-it is making an impact on the lives of those that need it the most. Growing up in the South Bronx, Mr. Dominguez developed a keen perception of the systemic cycles that prevent communities from enjoying a safe environment in which to prosper and raise children. Fueled by his past experiences and driven by his desire to do justice, he rose from difficult circumstances, attended the State University of New York at Buffalo and worked tirelessly to position himself to become a voice of the voiceless.

Mr. Dominguez began his career as a social worker serving the mentally-ill and homeless in Atlanta. He also worked as a counselor on Georgia’s suicide hotline. It was these early years in mental health that provided the training he needed to communicate persuasively with tact and compassion. After law school at Western Michigan University, he clerked for then Chief Judge Anne Barnes of the Georgia Court of Appeals. Later, he became a criminal defense attorney, before leaving his practice to become a state prosecutor. As a prosecutor, he acquired significant jury trial experience. Despite his tremendous success in the courtroom, he acquired a reputation for being a conscientious prosecutor, discerning in creating opportunities for those in need of a second chance. His work as a prosecutor spans several metro Atlanta counties, including Rockdale, DeKalb, and Clayton, where he investigated and prosecuted a variety of felonies, from bank fraud to child molestation and homicide. Mr. Dominguez also enjoyed the honor and distinction of becoming the first Latino prosecutor in the history of those judicial circuits.

Mr. Dominguez later transitioned to civil litigation, joining Thomas Kennedy Sampson and Tompkins LLP as defense counsel for several major corporations and insurance companies to include MARTA and AMFAM. Today, as a Partner at the largest Plaintiff’s firm in the Country, Morgan & Morgan, he specializes in personal injury, negligent security and civil rights cases, where he has carved out a reputation for turning traditionally under-valued cases into six and seven figure judgments. His colleagues affectionately refer to him as “The Denominator” as a result of his significant contributions to the success of various trial teams. Mr. Dominguez is most passionate about his work fighting police brutality and on behalf of victims of violent crime, who have been killed in crime ridden neighborhoods, while apartment complex and motel owners profit. Time and time again, his secret weapon at trial has been his own personal hardships and unique perspective, which enable him to empathize with his clients’ struggles in a meaningful way and allow him to speak in an authentic and passionate voice on behalf of his clients.

Mr. Dominguez is an absolute game-changer in the courtroom, but he is equally as fierce out in the community. Known as an attorney-activist, he is often called upon to serve on legal teams addressing social injustices on behalf of community members. Mr. Dominguez has served as an advisor to Atlanta Mayor Keisha Lance Bottoms, as part of her Progressive Agenda Working Group, Commission on Criminal Justice Reform and on a special task force to help reconstruct the Atlanta Police Department's Use of Force Policies to reflect President Obama's recommendations on 21st Century Policing. Always mindful of his own humble beginnings, he provides pro bono legal services to youthful offenders, using his experience as a prosecutor to provide at-risk youth a second chance at becoming productive members of society by way of having their criminal records expunged. He is frequently asked to speak at schools, youth detention centers, and gang summits, sharing his experiences as an at-risk youth turned lawyer, community-leader, and father; constantly challenging young people to dream well beyond their immediate circumstances. Mr. Dominguez’ work with young people has also involved serving on various non-profit boards, to include The Black Man Lab, Let Us Make Man, and Globe Academy. He has also served on the board of DeKalb Volunteer Lawyers Foundation, where he provided pro bono legal services for victims of domestic violence. His leadership includes serving as President of the DeKalb Lawyers Association and serving on the State Bar of Georgia's Committee Seeking Equal Justice and Addressing Racism and Racial Bias, as well as, the Bar’s Advisory Committee on Legislation, which proposes legislation to the Georgia State Senate.

Mr. Dominguez has been admitted to practice before the Supreme Court of the United States of America. He has been recognized as one of Super Lawyers’ Rising Stars, Georgia Trend Magazine’s 40 under 40 Best and Brightest, National Bar Association’s 40 under 40 Nation’s Best Advocates, DeKalb Lawyers Association’s Legal Warrior, Latino Leaders Magazine’s Top Latino Lawyers in the Country and National Trial Lawyers’ Top 100 Trial Lawyers. But above all else, Miguel is a trusted, loyal, loving, dedicated friend and family man.