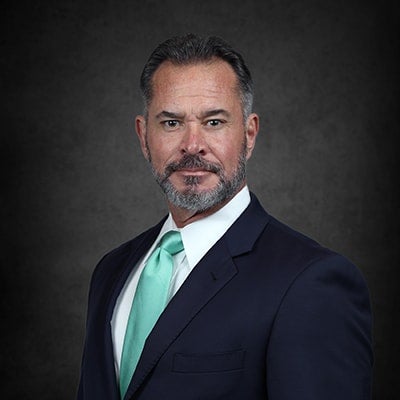 Mr. Hofmann began his legal career working in Sarasota for a private firm handling personal injury claims. It didn’t take long and he knew that he wanted to be a trial lawyer. Instead of following the typical private firm path, he became an Assistant State Attorney for the 12th Judicial Circuit and prosecuted criminals for two years. Having tried countless jury and bench trials, Mr. Hofmann was hired by a long-standing local firm where he handled personal injury claims for injured persons and extra contractual matters defending local establishments against negligence claims. He had just begun his partnership track when he was invited to join the Law Firm of Morgan & Morgan in 1999. Today, he is one of the owners and is the managing partner of Morgan & Morgan’s Sarasota & Bradenton offices. He focuses his practice on wrongful death and severe personal injuries resulting from vehicle crashes and premises liability.

Since joining Morgan & Morgan, Mr. Hofmann has been a frequent seminar presenter for effectively prosecuting a personal injury claim both in house and for plaintiffs’ lawyers from across the country. In 2013, he was selected for membership in The National Trial Lawyers Top 100 Trial Lawyers. This organization is noted as being composed of the premier trial lawyers from across the nation. Less than one percent of all attorneys are invited to join. In 2014, he was invited and joined the Southern Trial Lawyers Association comprised of an elite group of lawyers who are among the most respected by their peers and who are honored for the work they do to protect the individuals and families they represent and the profession they uphold. He is also a member of The Florida Bar, The Sarasota County Bar Association, The Florida Justice Association, the Manasota Trial Lawyers Board and the American Association for Justice. He consistently ranks within the firm’s top-producing personal injury lawyers for the Tampa office and has represented more than 10,550 clients for Morgan & Morgan.

Mr. Hofmann was recently elected as the president of the American Board of Trial Advocates (ABOTA), a national association of experienced trial lawyers and judges dedicated to the preservation and promotion of the civil jury trial and elevating the standards of integrity, honor, ethics, civility and courtesy in the legal profession. Herb has also been honored with the prestigious AV® Peer Review Rating by Martindale-Hubbell, the preeminent national publication in the legal field. According to Martindale-Hubbell, "An AV rating is a significant accomplishment - a testament to the fact that a lawyer's peers rank him or her at the highest level of professional excellence. A lawyer must be admitted to the bar for 10 years or more to receive an AV rating. This rating is based upon evaluations by other lawyers and is the highest ranking attainable by an attorney for ability and ethics in the practice of law. It is a distinction reserved for a select few in the legal community."

In 2015, Mr. Hofmann was recognized for excellence and achievements by the legal community when he received the 2015 Top Lawyers of Tampa award. Another proud accomplishment was being recognized by the American Institute of Personal Injury Attorneys for his exceptional performance as one of Florida's 2015 10 Best Personal Injury Attorneys for Client Satisfaction. He has been named to the list every year since. The American Institute of Personal Injury Attorneys is a third-party attorney rating organization that publishes an annual list of the Top 10 Personal Injury attorneys in each state. Attorneys who are selected to the "10 Best" list must pass AIOPIA's rigorous selection process, which is based on client and/or peer nominations, thorough research, and AIOPIA's independent evaluation. AIOPIA's annual list was created to be used as a resource for clients during the attorney selection process.

One of the most significant aspects of the selection process involves attorneys' relationships and reputation among his or her clients. As clients should be an attorney's top priority, AIOPIA places the utmost emphasis on selecting lawyers who have achieved significant success in the field of Personal Injury law without sacrificing the service and support they provide. Selection criteria, therefore, focus on attorneys who demonstrate the highest standards of Client Satisfaction. Mr. Hofmann works tirelessly in his fight to help the injured people he serves.