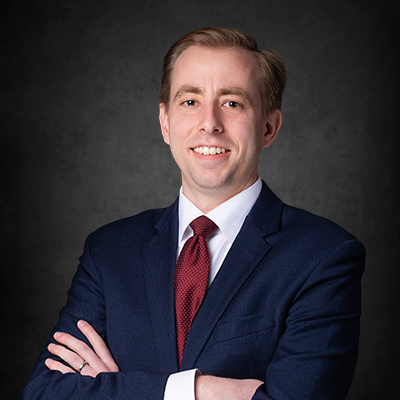 Cody uses his background in communications, public service, and experiences as a reformed defense attorney to benefit his clients in premises liability actions. Cody is admitted to practice law in both Georgia and Alabama and is driven by the opportunity to help those who have been injured and need assistance negotiating and fighting for the best possible recovery.

Born and raised in Gwinnett County, Georgia, Cody obtained his undergraduate degree from Georgia College and State University in Milledgeville, Georgia. He served as President of both the Student Body and Student Government Association, and a Student Ambassador. In recognition of his efforts to better the Georgia College community, Cody received the 2013 Georgia College Transformational Leader Award, named to Who’s Who in American Colleges & Universities, and inducted into Omicron Delta Kappa, the National Leadership Honors Society.

Cody attended Georgia State University College of Law, where he graduated with honors. While in law school, Cody worked at two law firms specializing in civil litigation. In addition, he served as the Deputy Director of Communications for the Democratic Leader of the Georgia State Senate and clerked for Judge Goger of the Fulton County Superior Court.

Cody began his career defending many of the largest hospital systems in Georgia. After spending three years on the defense side of these actions, Cody decided to follow his passion and use his knowledge and experience to be a fight for those who have been injured due to the negligence of others.